MAP39: Final Judgement is the thirty-ninth map in the 2020 re-release of Doom 64, and the sixth and final map of its new The Lost Levels episode. It was designed by Samuel Villarreal (Kaiser) and uses the music track "Dark Echo". 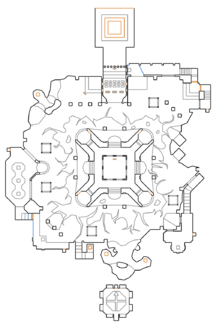 Map of Final Judgement
Letters in italics refer to marked spots on the map. Sector and Thing numbers in boldface are secrets which count toward the end-of-level tally.

* The vertex count without the effect of node building is 1651.

The opening area of the map is a tribute to MAP54: Redemption Denied, the final level of the Sony PlayStation version of Doom. The arena layout is similar to that of MAP24: No Escape from the original Doom 64 campaign.