MAP39: The House of the Blood of Innocents is the seventh map of the All Hope for Terror episode of 2048 Unleashed. It was designed by Walter Confalonieri (daimon) and uses the music track "". 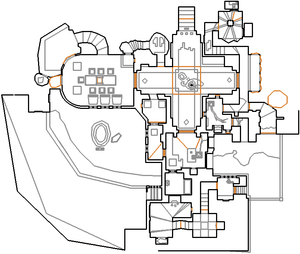 Map of The House of the Blood of Innocents
Letters in italics refer to marked spots on the map. Sector, thing, and linedef numbers in boldface are secrets which count toward the end-of-level tally.

You start in a cross-shaped room. Go through the door on your right (west) to enter a room with a dining table - the blue skull key is sitting on a metal hanging above the table. Climb up the staircase on your right as you enter the room to reach a chamber with two imps then step through the window - the blue key will descend to the table, so pick it up then go back through the door to the starting room to see that a bookcase has lowered on your left. Kill the imps that have appeared then step past the bookcase and climb the steps to a ledge overlooking the dining table; press the blue skull switch here (a cacodemon will be revealed behind a wall and immediately teleport away), then go back to the starting room.

Head through the east door (between the blue firesticks) then turn left and follow the passage to a chamber containing a super shotgun which is guarded by a spectre. Collect the weapon then return to the blue key door to kill some imps before going back to the starting room to pick up a red skull key that has appeared in the middle of the room. Head through the south door (between the red firesticks) to enter a room with a desk then go through another door on your left, watching out for a spectre that appears next to it. Follow the hallway, killing any shotgun guys that appear in front of you, to another blue skull switch and press it to lower a blue-bannered wall on your right after a short delay. Go through the wall to return to the starting room, kill the Hell knight that appears on Hurt Me Plenty skill level or higher then take the yellow skull key that has appeared in the middle of the room.

Go through the blue key door again and turn right this time, following the passage to a yellow key door. Go through it and turn left to see an armor guarded by a demon then try to open the door that the demon was guarding, which will reveal an eye switch on the north wall - press this switch followed by two other switches on the west and south walls to open the door so you can step through to a small courtyard which is overlooked by imps. Cross the courtyard and climb a set of steps on its south side to a door, step through to find a chainsaw then pass through a second door and head down to a chamber lined with skulls - a revenant will appear in front of you as you enter the room. Turn right and head down to a crypt (the cacodemon that teleported away earlier will be waiting here) then turn right and right again to find a third blue skull switch.

Press the switch then go back to the skull room where a teleporter has opened. Step into it to return to the starting room and kill the imp on your right (plus a spectre on Ultra-Violence and Nightmare skill levels) then head into the dark tunnel behind the starting room (which was previously blocked by colored bars) to finish the level.

* The vertex count without the effect of node building is 1737.