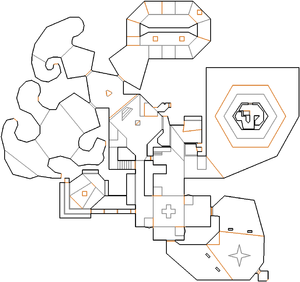 You start on a cross-shaped platform in a sludge pit, surrounded by four ledges with several enemies. Lower the lift in front of you and ride it to the next floor. Head straight forward to a silver lift at the north end of the room, then turn around and press the skull switch on the south wall to raise the floor in the center of the room. Ride the silver lift and use it to get onto the floor you just raised, then turn left and follow the floor to a raised ledge leading outside. When you step into the outdoor area, an alcove will open in the previous room holding imps, plus a spectre on Ultra Violence skill level (UV). Kill them and press the switch inside this alcove to open another wall to the west revealing more enemies; press yet another switch in the alcove they emerge from to open the wall and reveal a large open room.

Jump to the nearby tan platform and press the switch here to raise a step (this will allow you to climb back here more easily). Stepping on the tan platform also lowers a tall ledge elsewhere in the room which holds the blue keycard, plus several imps on Hurt Me Plenty (HMP) or UV; if the ledge rises before you can reach it, step on the tan platform again to lower it. Kill any enemies blocking your way and take the blue key.

Return to the tan platform and open the blue door here, then press the switch behind it to open a large wall in the previous room. Step on the flashing blue square in the center of the room to raise a staircase up to the newly-opened wall, and go through to a room with three doors and three switches in a triangle. Press the switch on the east side to open the west door and go through it to a large room with a sludge pit surrounded by four ledges that hold a number of imps. Drop into the pit and step on to the south ledge, which leads to a switch that temporarily lowers the west ledge. Run back to the pit and climb on to the west ledge before it rises. You will see the yellow keycard in front of you, so pick it up.

Backtrack to the starting room and get on to the east or south lifts, which lead up to yellow doors. Go through the door and follow the path round to a small pit with a four-point star. Drop into this pit, go through the exit door and press the switch behind it to finish the level.

The cross-shaped platform you start the level on holds a megaarmor, plus a chainsaw on multiplayer. The lift in front of you when the level starts holds a shotgun.

From the start of the level, take the lift in front of you and head straight forward to a room with a silver lift. Lower this lift and press the switch on its west wall. This will open an alcove holding a berserk pack and a box of shotgun shells.

In this same room, pressing the switch to lower the west wall also lowers a floor next to you with a monster, which is guarding another berserk pack and a box of rockets.

While standing on the ledge that held the blue keycard, you can run south to land on a ledge with armor, a medikit and two boxes of bullets.

From the room that has three switches around a triangular column, press the south switch to open a door to the north-west. Behind this door is a sludge pit with a backpack in it; drop into the pit and then head south-west to find a computer area map and a switch that lowers the ledge you just stepped off, allowing you to escape.