MAP40: Panic is the fortieth map in the 2020 re-release of Doom 64 and the "fun" level of its new The Lost Levels episode. It was designed by Samuel Villarreal (Kaiser) and uses the music track "Hellistatic". 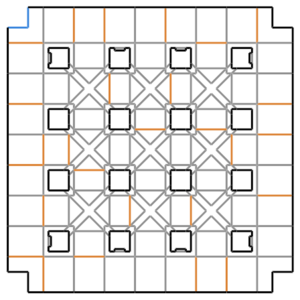 Map of Panic
Letters in italics refer to marked spots on the map. Sector and Thing numbers in boldface are secrets which count toward the end-of-level tally.

You start off surrounded by arachnotrons and with a rocket launcher and megasphere in front of you, and box of rockets all around the arena. You need to be moving quickly in this level, because not only it is easy to get pinned down by the enemies, but some of the enemies can teleport around and catch you off guard, and most importantly, the outer section of the arena has homing tracer cannons that periodically shoot fireballs in your direction. There is also a heavy fog over the arena, resulting in limited visibility.

There is another megasphere in the northwest and a BFG9000 and two energy cell packs in the northeast. There is also a berserk pack in the southeast but this is not especially useful on this map. For now, it is best to use the rocket launcher to kill all arachnotrons, since ammunition is so plentiful.

Once they're all dead, the hardest phase of the map begins, as you will have to face two cyberdemons. It is most efficient to use the BFG9000 to kill them, but great care must be taken not to be pinned down against one of the many pillars, and if the cyberdemons teleport around, that can also result in many dangerous situations.

Once both cyberdemons are vanquished, the level will be complete.

* The vertex count without the effect of node building is 384.

The arena design echoes the opening area of MAP38: Thy Glory, while the encounter design is somewhat reminiscent of MAP27: Playground (particuarly in the final cyberdemon fight), though much higher in intensity.