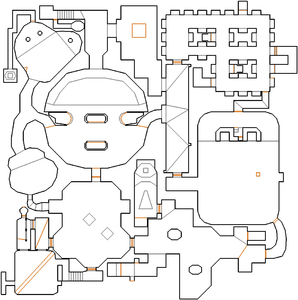 Make your way to the opposite end of the long outdoor area and open the door there. The next room is very large and dark, and contains a number of imps and arachnotrons. Go through either of the tunnels at the north end of this room and you will reach a stairway leading into a brightly lit alcove in the wall. Climb the stairs and the wall in front of you will open, revealing the blue keycard. Pick it up and return outside once more. If the wall containing the blue key closes, you can press use on the wall to open it manually.

Return to the outdoor hallway. About halfway down is a small passage leading to a round room with fuel tanks. Go through the door to the south to enter a dark room with numerous enemies. Head through the yellow door in the south-east corner, then through a small room to a blue door. Go through here and follow the passage round the metal grates to the exit door; watch out for arachnotrons in the room above who may teleport in to block your path. Once you are through the exit door, press the switch behind it to finish the level.

At the start of the level, you will see a wall on your right with blue triangles. Open this wall to find an alcove containing a shotgun.

From the level start, head down the stairs and through the doorway just on your right. In front of you is a column with cracked gray stone walls - press use on it and it will lower to reveal a chaingun, plus four stimpacks on Hurt Me Plenty or Ultra Violence.

The dark room on the east side of the level has a single brightly-lit square indicated by a blue ceiling light. Stepping on this square opens two alcoves to the north, which contain four demons but also hold a box of rockets, a box of bullets and a BFG9000.

From the stone room in the south-east corner of the level, you can enter a small chamber to the south which holds a soulsphere and a plasma gun. To get the items, you need to enter the north alcove in this chamber to lower one lift, then quickly press the switch in the south alcove to lower a second lift.

The south-west room overlooking the exit door contains four arachnotrons, but also contains an invulnerability sphere and one or two energy cell packs. The room can be entered from secret #7, or from the dark southern room once you have the blue key. Doing so lets you kill the arachnotrons early, instead of having them teleport into the rooms before the exit where they would block your path.