MAP40: Spelunking is the eighth map of the All Hope for Terror episode of 2048 Unleashed. It was designed by Ashton Bahnmiller (Razen) and uses the music track "Stage 1 theme" from Chelnov. 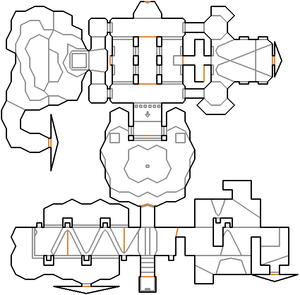 Map of Spelunking
Letters in italics refer to marked spots on the map. Sector, thing, and linedef numbers in boldface are secrets which count toward the end-of-level tally.

Take the shotgun, chaingun and armor in the starting area then head north to drop down a hole. Collect the red skull key ahead of you then go straight forward to find a satyr switch next to a super shotgun, which will open two closets behind you containing cacodemons as well as demons on Hurt Me Plenty (HMP) skill level and spectres on Ultra-Violence (UV) and Nightmare (NM). Enter the west alcove to find another switch next to a box of shotgun shells which will open four panels in the corners of the room and reveal zombiemen. If you go through the west walls you will drop into a cavern with one to three mancubi, and if you go through the east walls you will drop into a cavern with two revenants; either way, follow the cavern to a bloodfall which you can step into to be teleported back to the starting area.

Take the plasma gun that has appeared in the water then head south through a wooden panel which requires the red key to open and drop into the hole in front of you to land in a blood trench. From here you can go left or right to raise a bridge leading to the level exit.

Back in the starting area, go through the red key door again and cross the bridge in front of you to reach the exit.

After passing through the red key door and dropping into the blood trench, turn left and walk through a narrow wall opening then turn right to see an armor.