MAP40: The Decieved is the eighth and final map of the No Hope For Peace episode of Doom 2 Unleashed. It was designed by Philnemba and uses the music track "Facing the Spider" by Robert Prince.

After completing this level, the player is automatically returned to MAP01: Bashed Base. 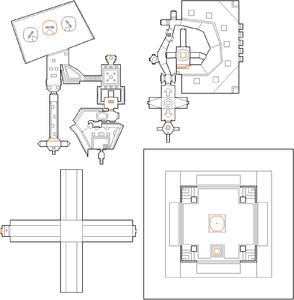 Map of The Decieved
Letters in italics refer to marked spots on the map. Sector, thing, and linedef numbers in boldface are secrets which count toward the end-of-level tally.

Take the shotgun and health bonuses around you then use the gray crates to step over the wall and drop to the ground below. Follow the path past some zombiemen and imps to a tan door and go through it to find two shotgun guys guarding a super shotgun - picking it up will open the wall ahead to reveal two chaingunners guarding stimpacks. Head left or right into a narrow tunnel containing more zombiemen and follow it to a nukage pit guarded by shotgun guys, along with zombiemen and a revenant on Hurt Me Plenty (HMP) skill level or higher - use caution as the pit is inescapable if you fall in.

Head west up a staircase and kill the shotgun guys at the top then turn right to find a megaarmor guarded by chaingunners and imps. Head south between the crates, killing any zombies and imps that block the way, until you reach a silver door and open it to confront two more chaingunners (plus a revenant on HMP or higher). Follow the passage around the crates past several zombiemen until you reach the red keycard which is guarded by two shotgun guys, plus an arch-vile on Ultra-Violence (UV) and Nightmare (NM) skill levels. When you approach the key, the passage will darken and two walls will open on either side to reveal a number of chaingunners.

Backtrack to the nukage pit and head round to its north side to find a teleporter which will return you to the start point. Kill some demons that may have teleported here as well, then open the exit door in front of you (requiring the red key) to confront two chaingunners plus a revenant on HMP or higher. Go through the door and step into the red hole to be teleported into a cavern - you will land on a megasphere but will also be surrounded by demons, so kill those in front of you as quickly as possible to give yourself space to move. Open the north door and kill the imps waiting behind it, then follow the passage past some spectres and cacodemons (including several in cages on the left) until you reach one or more mancubi. You may also notice an arch-vile in one corner which teleports elsewhere when it sees you.

When you reach the end of the passage, turn right to enter a fleshy chamber - the entrance will seal behind you. Pick up the yellow skull key surrounded by health bonuses, which will open three walls revealing a number of imps.

Kill all the imps then go into the north alcove to find an eye switch which will lower a wall in the east alcove and allow you to escape. Backtrack to the room where you first entered the yellow key area, watching out for two pain elementals on the way, to confront the arch-vile that teleported away earlier - kill it along with any resurrected monsters then open the south door between two yellow skull pillars. You will be confronted by an arch-vile on HMP or higher - dispose of it then step on the patch of sky on the floor to open three walls, revealing four chaingunners and one or two revenants. Enter the revenants' alcove to find another patch of sky and step on it to be teleported to a cross-shaped hall.

You will land on an invulnerability powerup and will be surrounded by a rocket launcher and many boxes of rockets - use these items to fight off the large crowd of revenants and chaingunners around you, taking the megaarmor and supercharge at the south and north ends of the room if needed. Go to the east end of the room to find an eye switch and press it, then head to the west end and run into the fire wall to leave the area. Approach any of the marble walls to lower them, revealing a large arena with a spiderdemon and an arch-vile (replaced with a cyberdemon on UV and NM) - there are also mancubi and arachnotrons behind the fences at the edges of the arena.

Fight off the enemies while you wait for the central column to lower - there are two energy cell packs, a partial invisibility and a megasphere in the corners, which will also offer cover from some of the monsters. Once the central column has lowered, step on it to finish the level.

Linedef 554, next to the yellow key, uses linedef type 106 (W1 Door Open Stay (Fast)) but does not have a tag, so stepping over this line does nothing. Based on its location, it was meant to open three closets containing imps.

* The vertex count without the effect of node building is 1547.