MAP41: Ensanguinated Domicile is the ninth map of the All Hope for Terror episode of 2048 Unleashed. It was designed by Sebastian Graham (General Rainbow Bacon) and uses the music track "". 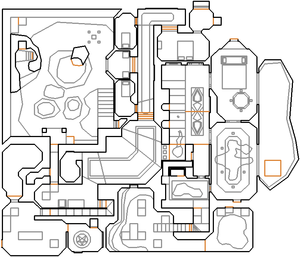 Map of Ensanguinated Domicile
Letters in italics refer to marked spots on the map. Sector, thing, and linedef numbers in boldface are secrets which count toward the end-of-level tally.

Climb the stairs and head straight forward to collect a super shotgun, watching out for any chaingunners and shotgun guys lying in ambush. Turn left and left again to walk round a large orange rock then turn right to see a hole in the ground that you can drop into (a cacodemon will emerge from the hole on Hurt Me Plenty (HMP) skill level or higher) to find a tombstone on your right. Press the tombstone so it sinks into the ground, then step into the teleporter to return to ground level - head into the tunnel that has opened in front of you until you reach a lift with skull walls which will take you up to the main building.

Kill the demon in front of you (and a Hell knight on your left on HMP or higher) then follow the passage past some shotgun guys to a door and step through it a dark hallway with a knight at the end (replaced with a baron of Hell on Ultra-Violence (UV) and Nightmare (NM) skill levels). Follow the hallway round the corner to collect a backpack then open the door next to it to confront a pain elemental before turning left and left again to find a knight guarding a teleporter. Step into the teleporter to land on one of the large orange rocks in the starting area - from here you can head south to jump down the rocks to a ledge with the red skull key, but watch out for an arch-vile, revenants and demons that teleport into the area.

Ride the skull lift up again and turn left to see a gray door which requires the red key, open it and step through to find a box of shotgun shells guarded by a revenant (plus one or two more revenants that teleport in behind you). Climb the stairs to the top and head through a wall that lowers to enter a room with some lost souls, press the lion switch on the west wall then go back through the red key door and turn right to return to the door that led to the dark hallway - a set of bars have lowered allowing you to pass through the east doorway. Head down the stairs (watch out for chaingunners, a revenant and an arch-vile/baron that teleport in behind you) to find a megaarmor guarded by a spectre then turn right and right again to see a plasma gun on a colored mat. Approaching the weapon will lower two of the stairs, revealing revenants on UV and NM or imps on lower skill levels.

Head south through a stone archway (a knight, revenant or arch-vile will appear behind it depending on skill level) then walk forward past a crate and open a door on your right. Follow the stairs down and take the supercharge at the bottom, then turn left and left again and follow the passage to a chamber containing a pool of blood - as you approach a knight will teleport in to the area as well as a varying number of chaingunners, revenants and arch-viles. Kill them if you wish, then press the lion switch by the blood pool to finish the level.

In the room with the gray floor next to the red key door, enter the doorway in the west wall to find a berserk pack surrounded by barrels.

In the south-west corner of the level, head east into an adjoining room with a pentagram on the floor to find a rocket launcher. There is another room to the north containing armor as well as burning barrels.

Next to the colored mat with the plasma gun are two rooms guarded by a cyberdemon which is patrolling outside. Press the lion switch in the north room then quickly run south to press a second switch which is temporarily revealed; after this, quickly run to the archway south of the colored mat to find a third switch. Press the third switch before it is concealed again to lower a teleporter that the cyberdemon will step into, sending it to an enclosed area. Note that this action will prevent you getting 100% kills.

Linedef 1040 uses the "W1 Crusher Start with Slow Damage" action and is set to affect sectors using tag 41, however there are no sectors in the level using that tag so stepping over the line does nothing.