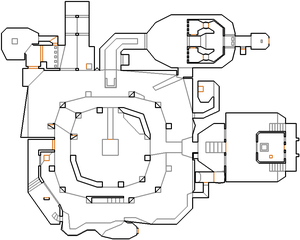 Map of O of Destruction
Letters in italics refer to marked spots on the map. Sector, thing, and linedef numbers in boldface are secrets which count toward the end-of-level tally.

Proceed along the walkway to your right and take a right across the bridge into a dark metal area. Climb the stairs to another outdoor area with trees, then proceed up either staircase into the structure ahead of you. Once you pass through the doorway inside the structure, an arachnotron will be released to defend the blue keycard in the room. Take cover behind either side of the door if needed. Once the arachnotron is dead, re-enter the room and pick up the blue keycard. Now return to the main area of the level.

Make your way along the walkway to the opposite (west) side of the area and go through the blue door. Follow the path to a room with a gargoyle switch in the center and press it. Continue through this room, up the small staircase, and along a ledge which is rising. Press the switch on the other side of the ledge and return to the main area once again. Continue along the walkway to its north side, and cross the newly created bridge to the red keycard on the central platform.

Drop down into the sludge to the north-west of the central circular walkway and head through the red door. Proceed through the hallway, towards the metal bars (which will automatically open), and up the stairs, arriving at a pillar with another gargoyle switch. Press it to lower a barrier on the walkway just outside. From here, drop into the sludge and follow the walkway round to the right until you find a gargoyle switch in a green pillar. Press this to lower the nearby floor which will put you back on the circular walkway. Go round to the north side and run across to the platform you opened earlier. Follow the platform until you drop into a dark cave. Dispose of the enemies here and head through the brightly lit tunnel in the green structure ahead. You should now be in an "E"-shaped sludge room. Ride the lift in the upper prong of the "E" up to a switch. Press it, ride the lift back down, and run into the timed lift that just lowered in the lower prong of the "E". Press the switch there to open the gate to the exit switch.

As the level starts, there is a staircase on the other side of the wall behind you. This staircase allows you to get out of the sludge if you fall into it, and also has a shotgun at the bottom.

Before climbing the metal staircase in the room east of the O, turn round and look at the walls either side of the entrance. You will see a pool of blood in front of the wall on your left; you can walk through this wall to find a soulsphere behind it.

A plasma gun can be found in the blue keycard room, behind the box that held the arachnotron.

When you press the switch that lowers the barrier blocking the northern walkway, the pillar it is attached to will lower to reveal a rocket launcher.

When you drop into the dark room before the exit, hug the wall on your right and follow it round to find a BFG9000 hidden behind the green structure.

At the very end of the level, just before the exit switch, you will see a teleporter to your right. Step into it to reach a high ledge overlooking the O which holds another soulsphere. After getting the item, walk back along the ledge to drop back into the dark room leading to the exit.

Because of a peculiarity of the Doom engine that allows players to press a switch no matter how far above or below it they are, one can skip a large amount of the level by pressing the gargoyle switch at the top of the staircase past the red door while standing in the sludge below it. They can then jump onto the cement walkway leading to the exit area from the circular walkway.