MAP42: Suspicious is the tenth map of the All Hope for Terror episode of 2048 Unleashed. It was designed by Daniel Bettenbuk (FractalXX) and uses a MIDI rendition of the music track "One Step Closer" by Linkin Park. 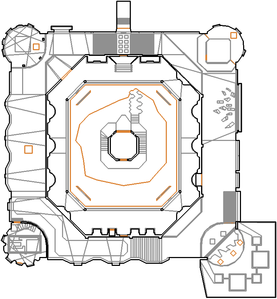 Map of Suspicious
Letters in italics refer to marked spots on the map. Sector, thing, and linedef numbers in boldface are secrets which count toward the end-of-level tally.

Open the door in front of you to find a shotgun; the floor will rise and carry you up to a second door which you can open to get outside. Run straight forward past some zombiemen and shotgun guys to find a super shotgun and flip the switch behind it, which will raise a wall around the starting building (any monsters trapped behind the walls can teleport out by approaching them) and cause two arch-viles to teleport in. Head round to the north side of the wall to find a chaingunner guarding another switch at the top of some steps, then flip this switch to lower a wall on your left and reveal an imp. Step past the wall to find a switch which disappears as you approach; you will need to kill two spectres while you wait for the wall in front of you to lower.

Once the wall has lowered, head east down and up two sets of stairs to find a structure containing a Hell knight and a backpack; step over the nukage and enter the structure to make the floor rise, then quickly step forward to land on a ledge with the blue keycard which is guarded by two chaingunners (the rising floor will crush you if you fail to step off). After taking the key, kill the lost souls that teleport in then step into the nukage; the walls blocking your way will open after a short delay so you can escape. Follow the hallway south and west past a number of small monsters; you will pass some steps leading up to some yellow bars, then go down another staircase leading to an area with two revenants and a baron of Hell.

At the end of the passage you will reach a gray door requiring the blue key; open it and kill an arch-vile waiting at the bottom of some steps, then flip the switch it was guarding and head back upstairs to find that a wall to the north has lowered, revealing a teleporter guarded by several enemies including revenants, mancubi and a knight and baron. Step into the teleporter to reach an enclosed area with three lost souls and a revenant, kill them then take the megaarmor and yellow keycard they were guarding; the wall will open to reveal some zombies that are teleporting in below.

Go back to the steps leading up to the yellow bars and open them to confront a mancubus and four zombiemen who are guarding three pressure pads. The pad nearest the entrance will open the exit, while the middle pad will reveal zombies on a ledge behind you and the furthest pad will reveal arachnotrons, knights and a baron outside. After stepping on the pads, take the box of rockets and box of shotgun shells that appear in the room then make your way back to the two large staircases at the north side of the level, killing an arch-vile that gets in your way. A wall between the two staircases has lowered; step into the tunnel behind it to finish the level.

* The vertex count without the effect of node building is 2368.