MAP42: The Factory is the forty-second level of the Sony PlayStation and Sega Saturn versions of Doom, and the twelfth level of the Doom II episode. It is based on the original MAP12: The Factory, with modifications made to adapt the map to the consoles' limitations. The author of the original map is Sandy Petersen.

Completing this level will take the player directly to MAP43: The Inmost Dens, as the Downtown level is not present in the console games. 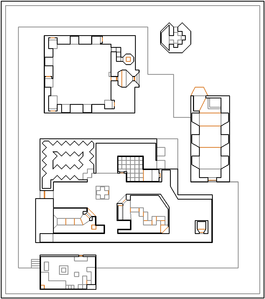 Head towards the red brick building in front of you and use the metal lift to gain entry. As you proceed through the building, platforms along the walls will rise and release imps, so be cautious. Go through the wooden door at the end of the building to find a brown brick building in front of you. Turn right and follow the building round to its west side, where you will find a door leading inside the building. Head forward and turn right at the junction, passing a blue door and then a mancubus on your way to the wall. From here, turn right and head down the corridor to the blue keycard which is guarded by an arachnotron. Now turn around and head forward until you reach the opposite wall of the building. You will find a small building here - open the door and take the yellow keycard inside, which is guarded by lost souls.

Return to the blue door you passed earlier and go through it. Behind the door is an armor pickup - approach it and the floor will drop away, putting you in a room with shotgun guys. Kill them if you wish and step into the teleporter here to get back outside. Drop off the ledge you arrive on and turn left to see a large square building, with an entrance flanked by green firesticks. Go to this entrance and open the door, then head through the next room to a yellow door, grabbing the berserk pack on the way. Behind the yellow door is a large room surrounded by many moving platforms, some or all of which contain cacodemons. Five of these platforms lead to switches that need to be pressed to open the exit - clockwise from south-east, they are the first, fourth, fifth, seventh and ninth platforms.

Once all the switches are pressed, head into the small doorway in the north-east corner of the room and follow the passage to the exit teleporter.

As the level starts, there is an octagonal brown building on your right. This building contains a number of shotgun guys and steps leading upwards. Climb to the top to find armor and a partial invisibility powerup, plus a plasma gun in multiplayer.

From the center of the main building, you can get several useful items.