MAP43: Simple Task is the eleventh map of the All Hope for Terror episode of 2048 Unleashed. It was designed by Ilya Lazarev (joe-ilya) and uses the music track "Danielle's Face" by Edwin van Veldhoven. 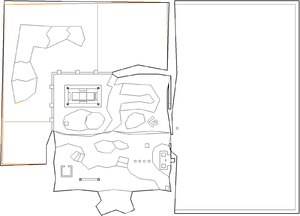 Map of Simple Task
Letters in italics refer to marked spots on the map. Sector, thing, and linedef numbers in boldface are secrets which count toward the end-of-level tally.

Kill the three zombiemen in front of you and take the chaingun, then flip the computer skull switch to lower the floor to an area with two demons and imps. Grab the armor if needed then flip a second skull switch to get to ground level - you will find yourself in an open area with numerous enemies including several mancubi that need to be killed to progress. There is limited cover so stay on the move as much as possible - a shotgun, super shotgun, rocket launcher and supercharge can all be found in this arena.

Once all the mancubi are killed, the south wall will lower to reveal a second arena with several arachnotrons as well as imps, cacodemons, revenants and Hell knights - make sure to collect the armor under the imps' platform as well as the plasma gun sitting on it to help you. After killing all the arachnotrons a set of platforms will rise and form steps up to a ledge in the south-east corner of the level - climb up to the ledge and pull the chain switch behind the exit sign, which will reveal two arch-viles and a pain elemental blocking the exit teleporter. Kill the enemies then step on the teleporter to finish the level.