Completing this level takes the player directly to MAP44: Suburbs, as the Industrial Zone level (plus the secret levels Wolfenstein and Grosse) are not present in the console games. 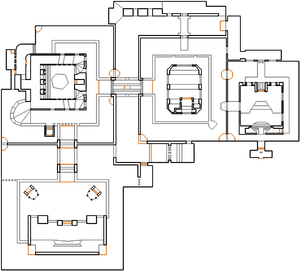 From the start, go right and head down the curved staircase in front of you. Head forwards past the red door, around the next corner and through the door to the right. Step into the patch of light in the next short corridor to open the door ahead. Continue around the building to the right until you reach a staircase, go up it and through the door to enter the building. Get a running start and jump through the largest window straight ahead - you should land on a bridge on the far side of the gray stone barrier. Continue along, across the water and through the arched doorway, then take a left. At the end you will find the red skull key on a ledge.

Backtrack to the red door near the start. If you fall into the water on your way, ride one of the many semi-circular lifts up and drop onto land. Press the switch behind the red door to lower the nearby red bars. Go through the door behind them and cross into the next outdoor area. Kill all the enemies here, enter the building ahead and take the blue skull key.

Return to the second outdoor area and run through the window again, landing on the bridge. This time, head right after passing through the arched doorway. You will reach a dead end with a window to the right. Run through the window and onto the adjacent platform. If you fall in the water, you can lower the platform like a lift by pressing use on it. Continue along the next hallway to its end and across the bridge to the blue door. After passing through it, continue straight forward through the building, running across the gap, to reach the exit switch.

A megaarmor can be found inside the building in front of you at the start.

There is a berserk pack at the northern end of the walkway with the red door, plus a medikit on Ultra Violence skill level (UV).

There are two small "guard towers" in front of the blue key building. The eastern tower holds a partial invisibility powerup - use the lift on the north-east side of the tower to get to it.

When you have located the blue key, you can jump in the surrounding water. There is a door behind a corner on the eastern side of the area. As you turn right after entering the door, you will find a barred room with a soulsphere inside. The bars are opened by a trigger in front of them, and may help you hold back the nightmare spectre that appears on HMP and UV. If you stay in the room when the bars close, you can make an escape through a window to the second outdoor area and use a lift to drop onto land again. (Alternatively, the soulsphere can be collected on an earlier phase. You can reach the barred entrance by dropping in the water at the second outdoor area and using the lift in its southwest corner. Furthermore, the aforementioned door can be opened from its north side, which provides an optional route to the blue key area once you have pressed the switch to lower the red bars.)

Back in the water around the blue key building, you can travel to the north-west corner and use the lift here to get over the wall. From here, look north and you will see a narrow tunnel in the distance containing stimpacks. Enter the wooden door there, grab the rocket launcher in the revealed room and press the switch to lower a lift to the starting point. Also, if you pass the door instead of going through it, you will enter a small room with a flashing light - step into this light and the ceiling in the next room will start to crush. The motion can be interrupted by returning to the door again. If the ceiling stops too low, you need to start the crusher again and time the interruption so that you are able to enter the room.

Due to the large number of sidedefs used in this level (2,587 on PC), most changes made for console ports focused on simplifying geometry and reducing the number of sectors used.