MAP44: Lost and Found is the twelfth map of the All Hope for Terror episode of 2048 Unleashed. It was designed by Ilya Lazarev (joe-ilya) and uses an untitled music track by Paul Corfiatis. 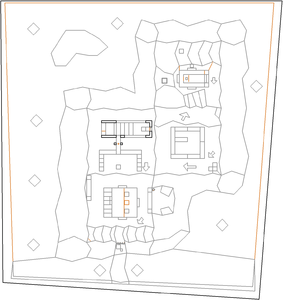 Map of Lost and Found
Letters in italics refer to marked spots on the map. Sector, thing, and linedef numbers in boldface are secrets which count toward the end-of-level tally.

You start in the north-east corner of the level and must reach the south-west area to find the red skull key. Walk past the imps in front of you to reach a supercharge and an armor, then turn left and head straight forward over a couple of blood pools until you see a green stone building on your left. Head round to the west side of this building (you may have to push past an arachnotron blocking the way) to find some steps leading down to an enclosed area with cacodemons and shotgun guys. The red key is sitting on a white teleporter pad - go round to its east side to collect the key, killing two spectres that are revealed as you approach.

Go back up the steps and look north to see a brick structure guarded by various monsters, mainly zombiemen and chaingunners. Climb up the brick steps and follow the walkway to a red skull bar, open it and kill the Hell knight blocking the path then step forward into a building containing several imps. Go down the steps and press the satyr switch at the bottom, kill the two revenants that are revealed behind you (plus spectres on Hurt Me Plenty skill level or higher) then head back to the large blood pool south of the start point. There is a dark arrow in the pool pointing at a set of steps - climb them and turn right to see that the door into the building ahead has opened. Kill an arch-vile and spectres waiting behind the door then flip the computer skull switch behind them.

Leave the building to see that a dark arrow has appeared on the floor outside pointing south - follow it to a trail of arrows that will lead you to the south-west corner of the level. A set of bars in a blood pool has lowered - kill the arch-vile that has appeared here, collect the rocket launcher then step past the bars to finish the level.

A super shotgun can be found on the north side of the marble building near the start point. Approaching it will cause one or two cacodemons to teleport into the nearby blood pool.

A chaingun and a partial invisibility can be found on top of a ruined brick structure on the east side of the level.