MAP44: Suburbs is the forty-fourth level of the Sony PlayStation and Sega Saturn versions of Doom, and the fourteenth level of the Doom II episode. It is based on the original MAP16: Suburbs, with modifications made to adapt the map to the consoles' limitations. The author of the original map is Sandy Petersen.

This level contains an added secret exit to MAP58: The Mansion. 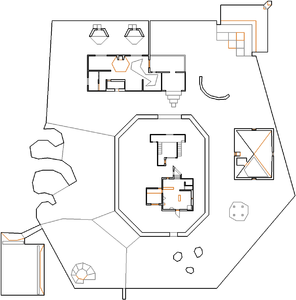 From the start, walk straight ahead and go through the door just around the corner. The outdoor area you arrive in consists of two small buildings inside a tall, circular, black barrier wall, as well as several buildings outside the wall. There are two exits in the black wall (B); go through either and make your way to the nukage pond in the south-west corner of the level. In the pool is a wooden structure with some stairs leading up to the blue skull key. Upon taking the key, a large number of monsters will teleport in - imps appear on all skill levels, joined by cacodemons and mancubi on Hurt Me Plenty (HMP) and Ultra Violence (UV) skill levels.

North of the starting building is a gray brick building; climb the tan stairs and follow the path round to a wooden door to get inside the building. You will see a blue door on the left - go through it and take the red skull key sitting on the window behind the door. (If you want to reach the secret level, do so now following the instructions below.)

To exit the level, head back through the door you used to enter the gray brick building. You will see a black and white cubic structure in front of you. Press use on the sides of the black platforms here and they will lower like lifts, allowing you to climb the structure. Lowering the second lift also opens a room at the top of the structure containing a number of imps. In the corner of this room is a red skull bar; open it with the red key and step into the teleporter behind it to finish the level and go on to MAP45: Tenements.

This level contains a secret exit to MAP58: The Mansion, accessible after going through the blue door in the northern brick building. At the window that holds the red skull key, you will see a skull switch on the wall next to it. Press this switch to temporarily lower the skull wall in the previous room and reveal a teleporter; step into that teleporter to be taken to a ledge with four plasma guns on it.

As soon as you arrive, run forward off the ledge and go to the west side of the red brick building in front of you. Open the silver door in the wall here to find that the skull wall behind it has temporarily opened; step through and press the skull switch behind it to go to the secret level. If the secret exit shuts before you reach it, go back to the red skull key room to try again.

There are two podiums north of the gray brick building on the north side of the level, which hold mancubi on HMP and UV. You can get to the podiums by heading west around the outside of the building. The west podium holds a soulsphere, while the east podium holds a shotgun and a box of shells.

Inside the gray brick building is a room sealed off by bars, which contains a berserk pack and a rocket launcher. You can open the wall just south of the bars by pressing use on it; alternatively, the wall will open when you collect the blue key.

The high number of monsters in this level, combined with the high occurrence of monster infighting that results, frequently causes the PlayStation port to crash on high skill levels during this level.