MAP45: Simple Garden is the thirteenth map of the All Hope for Terror episode of 2048 Unleashed. It was designed by Ilya Lazarev (joe-ilya) and uses an untitled music track by Paul Corfiatis.

This level contains a secret exit to MAP49: Rat Race. 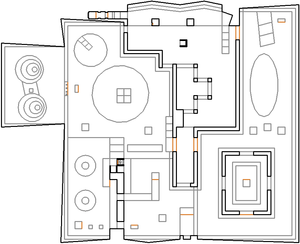 Map of Simple Garden
Letters in italics refer to marked spots on the map. Sector, thing, and linedef numbers in boldface are secrets which count toward the end-of-level tally.

Take the armor, shotgun and super shotgun in front of you and use it to kill one or two demons (plus a third which teleports in behind you), then lower the lift ahead to reveal one or two zombiemen. Ride the lift up to an outdoor area with imps, zombiemen and a Hell knight then look in the south-west corner to find a switch, which will lower the lift from the start point as well as a second lift to the north. Ride this lift up and follow the tan walkway to an elevated area with more imps and an arachnotron, then climb the red steps on your left and follow a ledge past some shotgun guys until you reach two metal posts, then step across them to a square platform (you will need to kill a chaingunner first on Hurt Me Plenty skill level or higher). From here you can run north across two round platforms to reach the blue keycard.

Kill the cacodemons and pain elementals teleporting in to a circular water pool to the north-east, then head east up a set of steps and open the door at the top to confront a knight guarding a second door which requires the blue key to open. Step through it to see some square pillars with one or more knights on them; north of these pillars is a water pool guarded by several mancubi as well as shotgun guys and spectres. Kill everything then look in the north-east corner to find a switch which will lower one of the pillars you saw earlier. Step on the pillar before it rises again then step east to reach the yellow skull key sitting on a high wall.

Look south to see a rectangular metal building, then go to the south side of this building to find a yellow key door which is guarded by one or two revenants. Open the door and kill the cacodemons, imps and spectres waiting inside then examine the central column to find a switch on its north side which will lower the column, revealing an arch-vile guarding a red keycard. Take the red key then go back to the circular pool in the north-west corner of the level to find a switch in front of some red bars - flip the switch and kill the spiderdemon that teleports in behind you. After a delay, you will receive a berserk pack and the red bars will lower; step through them to finish the level and move on to MAP46: Your Pattern.

Refer to secrets #2, #3 and #4 below for information on reaching the secret exit to MAP49: Rat Race.

The two pools of water in the north-west corner of the level hold a rocket launcher and a partial invisibility.

On the north side of the central building is a column containing a light amplification visor.