MAP45: Tenements is the forty-fifth level of the Sony PlayStation and Sega Saturn versions of Doom, and the fifteenth level of the Doom II episode. It is based on the original MAP17: Tenements, with modifications made to adapt the map to the consoles' limitations. The author of the original map is John Romero. 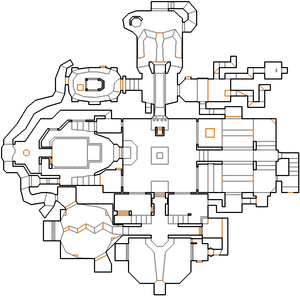 Head forward across the concrete bridge until you pass through a metal doorway. Turn left here and go forward to a rock cavern with a narrow path leading down to the red skull key. As you step down the narrow path, the entrance to this room will temporarily close and alcoves will open in the walls to release several enemies. After picking up the red key, drop into the south blood pit and step on the small teleporter in the south-west corner to get outside the room quickly.

Head north and go through the tan metal door that is now open to reach an outdoor area. Head through the doorway on your right as you enter this area and follow the corridor until you reach two staircases going in opposite directions. Take the staircase on your left and press use on the wall under the red firestick (it is a concealed switch), which will open the wall between the two nearby blue firesticks. Go through this wall, climb the stairs here and press the switch at the top. Turn right (taking the megaarmor) and drop out of the window ahead, where you will see a bridge rising ahead of you. Cross the bridge and drop into the narrow pit ahead, then press the switch on your right to raise the floor of the pit. Go back across the bridge and the two staircases to find that the nukage pit here is now spanned by another bridge. Cross it and take the blue skull key.

Backtrack to the outdoor nukage area and head straight across to the blue door. Once through this door, go left and climb up the stairs here. When you reach the top, a small alcove will open behind you containing a soulsphere. Go into this alcove before it shuts and take the powerup if needed, then go back up the stairs to find that a wall has opened to reveal a switch. Press the switch to open a door in the chamber on the opposite side of the room. Head to the other side of the room and climb the stairs here, going through the opening in the wall to a dark passage. Follow the passage to a room with a beating heart on a column, then head east and drop off of the ledge into a nukage pit. The floor in front of you will lower - go to it before it rises again to collect the yellow skull key. If the floor rises before you reach it, press the switch on the west side of the nukage pit.

Go back through the blue door to the outdoor area and go to the north side of the wooden pillar in this area. Open the yellow door here and flip the switch behind it to lower the yellow bars blocking the way forward. Pass the bars and head forward to a set of white stairs that go in two different directions. Go left at the fork and follow the stairs to the upper level of the room you just passed through. Open the door on your right to enter a tall room with a central cage, then follow the stairs round to a switch. Press it to open a door in the previous room and backtrack to the forked white staircase.

This time, go right at the fork in the staircase and follow the steps round to jump to the door you just opened. Go through it and press the switch on your left to lower the lift ahead. Ride this lift to the top and take the plasma gun ahead of you. This will open a passage in the north wall - follow it to the end and another passage will open nearby. Keep following the passages until you hit dead ends - eventually, two of the passages will end in bloody walls while the third leads to an exit teleporter. Step into this to finish the level.

In the blue keycard area, drop into the southern nukage pit and flip the switch on the east wall to lower the floor. This will reveal a hidden alcove in the south wall - enter it and take the lift upwards to a passage leading to a chaingun. From here you can return to a room north of the starting area.

In the yellow key area, your path to find the key will lead you to a room with a beating heart on a green column. From here, you can go west to find a river that goes north and south. If you go south you can follow the river to a partial invisibility powerup; if you go north you will find a backpack at the end of the path.

The pillar in the center of the outdoor area has an armor pickup at its base, and a soulsphere on top of the pillar. To get to the powerup, go through the yellow skull bars and turn left at the forked staircase ahead. Follow the steps up until you leap to a dark ledge, then go straight ahead to a teleporter which will put you on top of the pillar.

Several changes were made to this level compared to the PC version.