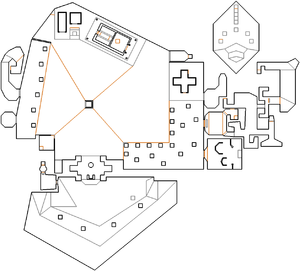 You start the level in a room with the blue exit door behind you, and a gargoyle switch in front of you. Shoot the switch with any impact weapon to open it and enter an outdoor area with a zombieman and several imps. Head north through the marble brick archway to enter the main courtyard, then head due north until you reach a wooden staircase, but do not go up it yet. Instead, turn left and you will see the yellow skull key in a corner for you to collect.

With the yellow key, climb up the wooden staircase you saw earlier and turn right. To the right of you is a marble and metal structure. Go around it to find the yellow door on the east side of the structure and go through it to find a teleporter. Step into this to be taken to a hexagonal room with a number of cacodemons, plus spectres on Ultra Violence skill level (UV). This room contains a large number of health bonuses, and the blue skull key is hiding among them behind the eastern-most column. Once you have the blue key, go to the western-most column and press the gargoyle switch to raise a staircase leading up to the teleporter which will take you out of this room.

Backtrack to the starting room, watching out for any monsters blocking your path. Once you return to the start, open the blue exit door and step into the sludge pool behind it to finish the level.

The area outside the starting room has an armor pickup on its west side, and a shotgun sitting on a square platform on the east side. Be warned that the sludge pit south of this area is inescapable if you fall into it.

The courtyard has four trails of health and armor bonuses radiating from a central wooden pillar, and a super shotgun can be found due north of that pillar. Between the trails are walkover lines that will open various alcoves around the courtyard when triggered.

Walking through the door in the south-east corner of the courtyard leads you into a teleport trap; you will appear on the opposite side of the room facing a number of enemies. Take the plasma gun next to you to dispatch them.

The door on the east side of the courtyard leads to a marble brick room that appears to only contain a berserk pack. When you approach the pack, a floor will rise to block the door and prevent you leaving. Open the south-east wall to enter a maze-like area containing a number of shotgun guys and demons. Make your way to the north-east corner of the maze to find a teleporter; it will lead to a switch that lowers the floor blocking the entrance door.

There is a "+"-shaped structure in the north-east corner of the courtyard. Shooting the gargoyle switch on the south wall will allow you to enter the structure, which contains cacodemons guarding a box of bullets, a box of shotgun shells and a box of rockets. There is also another invulnerability powerup in the corner north-east of this structure.

Climbing the wooden staircase at the north end of the courtyard opens the small building in front of you, revealing several imps (plus a revenant on HMP/UV). The building also contains two partial invisibility powerups.

From the aforementioned building, go east to a marble and metal structure. Behind the door on the west side you will find a soulsphere, but approaching it lowers the walls on either side to release imps (plus two demons on UV).

A few changes were made to this level compared to the PC version.

* The vertex count without the effect of node building is 673.