MAP46: Your Pattern is the fourteenth map of the All Hope for Terror episode of 2048 Unleashed. It was designed by Ilya Lazarev (joe-ilya) and uses an untitled music track by Paul Corfiatis. 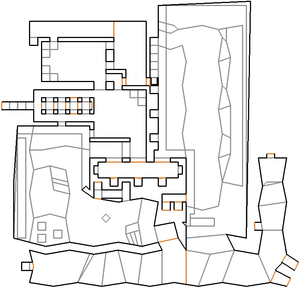 Map of Your Pattern
Letters in italics refer to marked spots on the map. Sector, thing, and linedef numbers in boldface are secrets which count toward the end-of-level tally.

You start in a room containing three locked doors and all three keycards, as well as zombiemen guarding an armor, chaingun, shotgun and super shotgun. All three keys are needed to reach the exit, but only one key can be taken at a time; the other keys will rise out of reach. The keys can be taken in any order, but the yellow key should be saved for last as that door leads to the exit area.

Take the red key (nearest the start point) and open the door opposite it to confront some imps and demons, then step through and head north until you see a staircase on your left with shotgun guys. Climb up the steps to a rock ledge and follow this south, killing or dodging any cacodemons (and a single pain elemental on Hurt Me Plenty skill level or higher until you reach the end, then turn right to see an arch-vile in a narrow passage. There are two switches in this passage - press the first switch between the blue key strips (the other switch will be blocked off) then return to the starting area to collect the blue key. Watch out for the cacodemons that have been revealed behind the high eastern wall.

Open the nearby blue key door and kill the imps waiting behind it, then step through and turn left to confront more imps. Turn left again and kill any mancubi waiting ahead then head south to reach an area with more mancubi and some chaingunners, as well as an arch-vile standing on a gray ledge to the east. Head east up some steps and kill one or two Hell knights waiting at the top, then drop down a hole to land on a partial invisibility - turn right immediately as there are a number of imps waiting in a mossy tunnel next to you. Enter the tunnel and head east to find a skull switch in an alcove next to a yellow key strip - press it then look north to find some cacodemons and a chaingunner guarding another switch. Flip it to lower a wall to the north, kill some chaingunners and knights then step past them to find a third switch.

Flip this switch then follow the tunnel south and west, where a wall has lowered to reveal some cacodemons guarding a white teleporter. Step into the teleporter then drop down to ground level and turn right to face more cacodemons which have been revealed; kill or avoid them then climb up the steps to the ledge that held the first group of mancubi, then run north to jump across to a ledge that will lead you back to the starting area. Take the yellow key from the middle alcove, open the door opposite it to face some imps then look north-west to see a blue structure which is guarded by Wolfenstein SS and one or two mancubi. Go round to the west side of this structure and open three doors to reveal a switch - press it then kill the monsters that have been revealed behind you (including an arch-vile) and shoot the switch behind them. This will reveal another switch behind you that you can press to finish the level.