Completing this level takes the player directly to MAP48: Nirvana, as the Gotcha! level is not present in the console games. 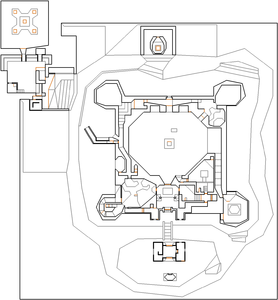 There are three keys but you do not have to collect them all. Collecting the red key and one other key will be sufficient to squeeze between the bars blocking the exit teleporter.

In the starting area, enter the building in front of you. Kill one or three shotgun guys. Enter the room to the right. In the room, push the skull switch. This will unlock the door to the citadel. Return to the first room and turn right. Open the door and cross the bridge. Enter the citadel.

In the citadel, go up any staircase and open the lion panel to the left. In the room push the skull switch to open two doors. You need to enter the northern door. You will be in a dark corridor. Turn right and open the lion panel. You cannot take the soulsphere yet. If you try to, you will teleported to another area (that you need now). In this area all you need to do is to shoot the cage to the left. This will raise a platform which will help you to get into the door (in case of you fall down before the platform is risen, you need to press the button on it while it is in the sunk level; use the automap to see the line in yellow; the first platform will lower and you will be able to raise the second one). Now, open the door and descend down until you can take the red skull key (taking the key also counts as secret). Fall down to the central area. Kill enemies here and collect items if you want. Take the door in the south to get back.

Back in the entrance of the citadel, open the lion panel to the west. In the room push the skull switch to open two doors. Enter the northern door. In the dark corridor go forward until you can see an opening of the citadel to the outside. Do not jump there but instead open the wall to the left. There is an armor pickup and it is counted as secret. Squeeze here and use a lift which brings you to another opening. Leap from here down to the water and to the red brick building. Ascend on the stairs and enter the entrance to the right. Beware of the slow crushing ceiling. Carefully enter the following room. In the room head into the wooden tower. Inside, push the skull to open two passageways. You need the passageway to the left. It will lead you to a dark room with five teleporters. You need the one to the far right (north east). Once you will be in a room, fight all the demons here and drop into a small shaft next to the skull button where you can take the blue skull key.

Get back to the room with five teleporters again (described above). This time, use the teleporter to the closest left (south west). In the room bump against the brick wall when climbing the stairs and it will lower. When you see an opening to the familiar room, turn left and take the yellow skull key.

Once you are ready to complete the level, head out of the citadel and head to the north side of the map. You will see a small brick building and a marble structure inside. Go around this structure and you will see three colored bars blocking your way. Open as many bars as you can and step on the water pool to finish.

in the central courtyard of the citadel, go to the north-east corner to find a skull switch near the ledge with the blue key. Press this switch to lower two ledges in the north wall; the ledge nearest you holds a super shotgun and a box of shotgun shells, while the ledge further away holds two boxes of bullets.

The square marble structure in the center of the citadel contains a rocket launcher. You can get it by going to the room with five teleporters (follow the walkthrough above to find it) and stepping into the middle teleporter. Once you collect the weapon, press the skull switch to raise the floor so you can get out.

Several changes were made to this level compared with the PC version.