MAP48: Demon's Dungeon is the sixteenth and final map of the All Hope for Terror episode of 2048 Unleashed. It was designed by Malrionn and uses the music track "Bluroc" by Kevin Schilder. 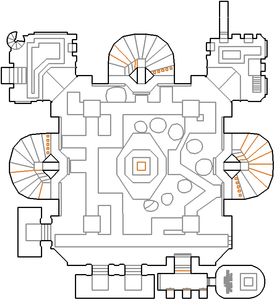 Map of Demon's Dungeon
Letters in italics refer to marked spots on the map. Sector, thing, and linedef numbers in boldface are secrets which count toward the end-of-level tally.

Take the chaingun and boxes of bullets in front of you then open the door on your left to find an armor. The area behind the door contains a stone walkway over a lava pit, and is guarded by zombiemen, imps and demons. Follow the walkway to the north side of the room to find the blue skull key sitting on a round step (guarded by one or two revenants on Hurt Me Plenty (HMP) skill level or higher) then head to the west side to find a set of blue bars that you can open. Follow the steps up to the top, collecting a rocket launcher, several boxes of rockets and an armor on the way - you will see that the stone walkway has risen to the next floor.

Kill the demons and cacodemons that teleport in then follow the walkway to its south-east corner (near the start point) to find the red skull key sitting on a pillar. Use the key to open the red bars on the north side of the room and climb another set of stairs to the top, collecting a plasma gun and energy cells along with a megaarmor and a supercharge. The stone walkway has risen again, and a variety of monsters will teleport in including mancubi, cacodemons, demons, Hell knights and imps - kill everything, then go to the south-east corner of the walkway again to find the yellow skull key on another pillar.

Open the yellow bars on the east side of the room and climb another set of stairs, collecting a BFG9000, energy cell packs and a megasphere. At the top you will see that the stone walkway has fallen away and been replaced by round columns leading up to a white teleporter at the center of the room. On I'm Too Young To Die and Hey Not Too Rough skill levels the teleporter is protected by four barons of Hell, but on HMP or higher you will face a cyberdemon that teleports in. Run up the stepping stones to the teleporter and stand on it to finish the episode.

A super shotgun can be found on one of the round steps.

* The vertex count without the effect of node building is 1387.