MAP48: Nirvana is the forty-eighth level of the Sony PlayStation and Sega Saturn versions of Doom, and the eighteenth level of the Doom II episode. It is based on the original MAP21: Nirvana, with modifications made to adapt the map to the consoles' limitations. The author of the original map is Sandy Petersen. 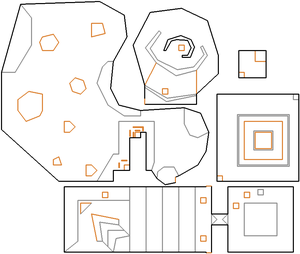 You start on a platform surrounded by health bonuses and medikits. Take the super shotgun in front of you and go into teleporter nearest to the hanging corpse in this room to reach an outdoor area. Follow the metal walls round in either direction, killing any shotgun guys (plus three spectres on Ultra Violence skill level) that get in your way. Once you get past the metal wall, follow the brown wall in front of you round to another teleporter and step into it.

You will arrive in a room with a triangular platform in front of you holding a rocket launcher. Press all four switches on this platform to raise a set of steps, then press on the lowest step to lower it like a lift and ride it upwards. At the top, go down the large steps in front of you and step into the right-hand teleporter. You will arrive in a small square room; press any of the walls to lower them and reveal some imps, then approach the next set of walls to lower these as well. Take the yellow skull key in the north-west corner of the room, then step into the teleporter in the south-west corner to return to the previous room.

Throw the switch in the north-east corner to open a tunnel back to the starting area. Go through the tunnel and step into the teleporter nearest to you to be taken to a large cavern full of nukage. Open the yellow bar doors in front of you, then follow the tan walkway round (passing blue and red bars on the way) until you reach the end and jump to a platform just below with a barrel. Press the switch here to lower a platform to the north, where the red skull key is protected by a number of chaingunners. Head over to the platform before it rises again to collect the key (it is advisable to collect the radiation shielding suit next to the platform on the way, as you will need to spend some time in the nukage.)

From the red key platform, head west through the nukage to the north-west side of the cavern. The long ledge against the north-west wall has the blue skull key on it; to reach it, press any of the walls of the platform near this ledge to lower it, then ride the platform upwards when it rises again. Jump over to the ledge and retrieve the key.

When you approach the teleporter in the outdoor area, the wall behind it will lower to reveal a small area containing four boxes of shotgun shells, plus a switch that will lower the long metal wall in this area. This area also contains four revenants on Hurt Me Plenty or Ultra Violence.

The yellow skull key room has a backpack in its south-east corner. There is also a megasphere sitting on a platform in the north-east corner; to get it, use the teleporter to leave this room and return to the staircase area. Press the switch in front of you to lower the megasphere platform, then step backwards into the teleporter and run forward to grab the powerup before it rises again.

The platform in the south-west corner of the nukage cavern has an invulnerability powerup; press any of the walls of the platform to lower it. The powerup is not guarded on the easier skill levels; it is protected by four Hell knights on Hurt Me Plenty, but only two on Ultra Violence.

A few changes were made when adapting this level for consoles. Unusually, there are no changes to the shapes of sectors in this level.