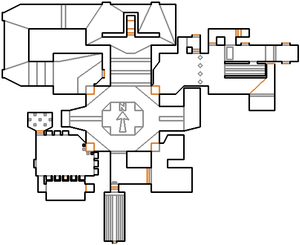 Take the shotgun in front of you if needed and lower the green marble lift next to it then ride this up to the central area. Kill the chaingunners on the compass platform ahead (on Ultra Violence (UV) skill level) and then run across to the platform. Lower the lion-faced block to the north-west and ride it up. Head over the lava pool and up the stairs, then follow the path round to a metal structure. Go round to the south side of this structure and open the door to find a teleporter. Go through it and pick up the blue skull key.

Use the narrow walkway here to get back to the compass platform, then lower the baron-faced marble block to the north-east and follow it down to another room. Open the blue door in front of you and press the switch behind it to lower the silver bars nearby. Head into the arched tunnel and turn left at the evil eye to drop into a small passage. Press the switch in front of you to open a wall to the east. Go through it to find two more switches; the south switch opens the wall you just went through, while the north switch lowers a metal platform at the other end of the tunnel. Press the north switch and ride the metal platform up to the red skull key.

Follow the small passage round and open the wall at the end to return to the silver bars, which have shut behind you. Go down the passage next to the arched tunnel to find a switch at the end; kill the chaingunners that ambush you and press the switch to open the silver bars, then go through them before they shut again. Backtrack to the compass platform and lower the satyr-faced marble block to the south-east, then ride this up to find a room with a red door. Open it, kill any chaingunners behind it and step through to find the exit door. Go through this and flip the switch at the end of the tunnel to finish the level.

West of the compass platform is a ledge with a rocket launcher (or two in multiplayer). To reach it, use the lion-faced marble block to enter the north-west room, but instead of dropping into the lava turn right and flip the switch on the east wall. This will raise a bridge from the compass platform to the ledge.

From the aforementioned switch, face north to see a berserk pack on a narrow ledge. Run off the platform you are standing on to get to it.

The chaingunners behind the red door are blind, and will not see the player unless they are injured or a player steps through the door. This is probably due to an anomaly in the level's REJECT table and also occurs in the PC version.

* The vertex count without the effect of node building is 486.