MAP50: Barrels of Fun is the fiftieth level of the Sony PlayStation and Sega Saturn versions of Doom, and the twentieth level of the Doom II episode. It is based on the original MAP23: Barrels o' Fun, with modifications made to adapt the map to the consoles' limitations. The author of the original map is Sandy Petersen. As its name suggests, the level contains a high number of barrels.

Completing this level takes the player directly to MAP51: Bloodfalls, as The Chasm level is not present in the console games. 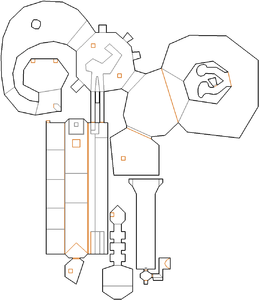 Map of Barrels of Fun
Letters in italics refer to marked spots on the map. Sector, thing, and linedef numbers in boldface are secrets which count toward the end-of-level tally.

You start in a long room containing many barrels, facing a wall that will open and reveal a chaingunner when you start moving. Turn around and run towards the door before the chaingunner starts firing and causes a chain reaction of explosions. At the end, open the door and head into the teleporter behind it to enter another room full of barrels; there are Hell knights here but they are facing away from you. Go straight forward past some alcoves with chaingunners, shoot the barrels when you are clear and head into the next teleporter.

You will arrive on a raised ledge west of the starting area, which holds more barrels and a varying number of lost souls. Shoot the wall on your right with an impact weapon to open it, head to the opposite end of the ledge and press the switch, then go back to where you teleported in; you will see that a ledge with a burning barrel has raised, letting you cross to the platform on the east side of the room. Drop down the steps and face north to find a number of demons heading towards you; kill them and head north into the metal tunnels they emerged from until you reach an outdoor platform over a blood pit. Take the rocket launcher here if needed, then drop off the south-east side of the platform into the blood. Step into the teleporter on this side to be sent to the large round chamber in front of it.

Go into either of the dark passages ahead (the doorway you entered through closes behind you when you do this) and follow them round to a small brown cavern, which contains imps guarding several boxes of rockets. Go inside and take whatever supplies you need, then backtrack to the round chamber to find that another area has opened to the south-west containing arachnotrons, plus revenants on Hurt Me Plenty (HMP) or Ultra Violence (UV) skill levels. Kill them, take the yellow skull key they were guarding and step into the nearby teleporter.

You will arrive on a ledge overlooking the earlier platform in the blood pool. Turn around and follow the passage upwards, killing any enemies that get in your way. There will be a number of demons at the end of the passage; kill them and step into the left-hand teleporter (the right-hand teleporter sends you to the ledge east of the starting room). You will arrive in a gray room with many barrels, where one or two chaingunners will immediately be alerted - run forward and go through the door at the end of the room before the chaingunners start a chain reaction of explosions. Once through, open the yellow door and destroy the barrels behind it, which will clear your path to the flashing blood pool which is the level exit.

There is a shotgun in the alcove that opens when you move from the start point.

The room you enter after using the first teleporter contains two backpacks, a berserk pack and a computer area map. These should be collected after blowing up the barrels and killing the enemies here.

Just before the cavern with the final teleporter is a platform holding a BFG9000 and a medikit; press the skull switch on the platform to lower it.

Several changes were made to this level compared to the PC version.

* The vertex count without the effect of node building is 356.