This level occupies the map slot MAP52. For other maps which occupy this slot, see Category:MAP52. 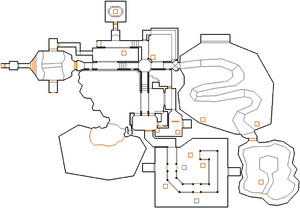 Press the gargoyle switch in front of you and follow the hallway through a four-way intersection, turning left at the end. Press the switch at the end, then go back down the hallway and through the now-open wall on the left. Kill the imps blocking your way and take the red keycard from the corner of the ledge they stood on.

Go back to the intersection you went through earlier and head west, going through the red door at the end. Cross the lava pit and climb the staircase. A floor ahead will rise to reveal one or two Hell knights; kill them and take the blue keycard in the alcove behind them.

Return to the intersection and head east, entering a cavern with a winding set of steps over a lava pit. Follow the steps up to the top and open the blue door, which leads to a narrow walkway over another lava pit. Follow the walkway round to its south side and cross to the central ledge with the yellow keycard. Backtrack to the four-way intersection and go north up the first hallway you used, which leads to the exit door behind a yellow bar. Open the bar and the exit door, then step into the water pool to finish the level.

A super shotgun can be found inside the starting room.

An armor pickup can be found on the same ledge as the red keycard.

The cacodemons (things 136, 137 and 138) inside the western alcove adjoining the walkway area past secret #1 are blind, as long as the player stays on the wooden walkway and makes no noise.

A number of changes were made to this level compared with the PC version.

* The vertex count without the effect of node building is 727.

Although the level is technically set in Hell, it uses keycards instead of skull keys.