Completing this level takes the player to MAP54: Redemption Denied, which is exclusive to consoles. The Spirit World, The Living End and Icon of Sin levels do not appear in the console games. 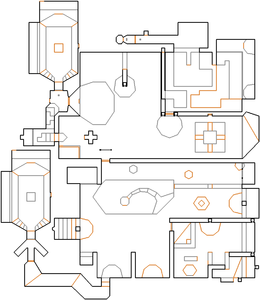 From the start, head north-east to a door leading to a library. When you approach the rocket in the corner of the room, the door will shut behind you and the bookcases will lower to reveal a much larger room with several enemies; avoid stepping into the brightly-lit areas in this room unless you want to fight more monsters. The area also contains two skull switches - press the east switch to open the bookcase and reveal another area containing a varying number of Hell knights guarding the yellow skull key. Take the yellow key (and the nearby invulnerability powerup) to lower the nearby wall and reveal more enemies. Step into this alcove to open the entrance door to the library, then press the skull switch on the south side of the bookcase you entered through to open another alcove (which is secret #2). Press the switch inside this alcove to open the bookcase so you can make your escape.

Once you get back through the library door, turn right to go to an area with a floating skull rock inside a brightly-lit sector. Approach the rock to lower two nearby walls with imps, then head past the walls before they rise again. Head west and go through the door at the end of the path, to see a wall with a left-pointing arrow in it. Turn left and follow the wall round until you reach a skull switch, then press it to lower the floor and reveal another door. Go through and open the yellow door on the right to enter a marble hall. Climb the stairs and take the blue skull key at the end of the hall, then shoot the demon-faced wall to the north to open it. Press the switch hidden behind this wall to re-open the yellow door so you can leave the hall.

Back through the yellow door, press the skull switch on the right to raise a staircase to a higher ledge. Open the demon-faced wall at the top and head straight forward, round a cross-shaped bookcase, to a large piped structure near a blue door. Open the blue door and press the switch behind it to lower the center of the piped structure, revealing Hell knights guarding the red skull key. Take the key and soulsphere, then look west to see a brightly-lit area with a skull pole nearby. Go through the door here to a wooden room with lots of gore, and press the skull switch on the left to lower the floor. Take another soulsphere and three backpacks here, then head west and open the red door at the end of the passage. Step into the lava pit behind the door to finish the level.

From the start of the level, head round the wall to your right and step into the lit area, which will open an alcove to the west containing zombiemen. When you step into the lit area in front of this alcove (containing a chaingun) another alcove will open on your left with a revenant. Step into the area that the zombiemen came from to open the next wall and reveal shotgun guys. When you go into that area, yet another wall opens to reveal more shotgun guys (their alcove contains another chaingun in multiplayer).

When you start the level, you can see a rocket launcher at the top of a set of steps over a sludge pit. Taking the weapon opens a monster closet to the west containing spectres, along with numerous pickups including a light amplification visor, a backpack and invulnerability.

After getting the blue skull key, there is a longer but possibly more rewarding way to get to the blue door. After getting the key, step into the red-lit square platform in the center of the hall to be teleported to a seemingly identical room. You will find a soulsphere in the spot that the blue skull key occupied in the previous hall. If the wall to the north is not open, shoot the demon-faced wall to open it and press the switch hidden behind it to open the south door out of the hall. Through this door, go straight ahead through the lava pit and open the wall at the end to enter a large hallway. Lower the silver lift and ride it up, taking the partial invisibility on the way. When the lift rises, take the ammunition and invulnerability powerup at the end of the passage then open the demon-faced wall. When you step through it, you will be teleported to a hidden area behind the structure next to the blue door.

Inherited from the PC version: There are two computer area maps in this level which makes it impossible to get 100% items, since the player can only pick up one map per level.