This level occupies the map slot MAP54. For other maps which occupy this slot, see Category:MAP54.

MAP54: Redemption Denied is the fifty-fourth and final level of the Sony PlayStation and Sega Saturn versions of Doom, and the twenty-fourth and final map in the Doom II episode. It is exclusive to those consoles and features the spiderdemon as a boss. 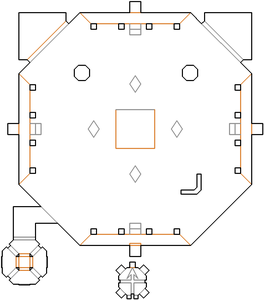 Map of Redemption Denied
Letters in italics refer to marked spots on the map. Sector, thing, and linedef numbers in boldface are secrets which count toward the end-of-level tally.

You begin in an octagonal room containing several weapons and ammunition. Walk all around the room so you grab everything, then step into the teleporter when ready.

The teleporter will take you to a large arena. Head down the steps and a marble pillar in front of you will lower, revealing a number of barons of Hell. Some of the barons will teleport to elsewhere in the arena and there are more barons in the corners, so watch your back as you fight them.

Once all the barons are dead, two walls in the north-west and north-west of the arena will lower, revealing one spiderdemon on I am a Wimp or Not Too Rough and two on Hurt Me Plenty or Ultra Violence. The spiders start facing away from you, so if they have not been alerted then use this time to collect more ammunition before waking them up. If you have a BFG9000 then use it to dispatch the spiders quickly; you can also lure them into shooting each other which will cause them to infight. Use the gray pillars around the arena for cover.

Once both spiders are dead, a wall in the south-west corner of the arena will open. Go through it to find the final teleporter, and step on to it to finish the game!

There are four diamond-shaped platforms in the arena that lower and rise at regular intervals. Clockwise from north, they hold a soulsphere, a megaarmor, another soulsphere and invulnerability.

There are four ledges at the edges of the arena with ammunition and teleporters. Each teleporter will send you to the next ledge in a clockwise direction (the north teleporter goes to the east ledge, for example).