This level occupies the map slot MAP57. For other maps which occupy this slot, see Category:MAP57.

MAP57: The Marshes is a secret map appearing on the Sony PlayStation and Sega Saturn consoles, part of the games' Ultimate Doom episode, which can accessed from MAP29: Twilight Descends. It was designed by Randy Estrella. 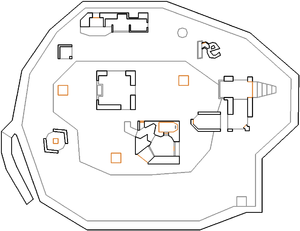 Map of The Marshes
Letters in italics refer to marked spots on the map. Sector, thing, and linedef numbers in boldface are secrets which count toward the end-of-level tally.

You start facing a switch, with the exit door on your left. Press the switch to lower the wall in front of you, and lower a floor behind you revealing a cyberdemon. You only need to kill the cyberdemon to open the exit, but this level contains a number of optional areas to investigate (see below).

Once the cyberdemon is dead, return to the starting room, head through the now-open exit door and press the switch behind it to proceed to MAP30: Threshold of Pain

In the south part of the level, there are numerous trees forming a forest of sorts. If you carefully search within it, you will find a light amplification visor and a super shotgun - this is the only place where the normally Doom II-exclusive weapon can be found in the Ultimate Doom portion of the game.

There is a wooden building in the east portion of the level. If you walk up the stairs you can notice two skull buttons; both manipulate the light level of the outdoor portion of the map. Press the one on your right to increase the light level for better vision. The other switch makes the area darker, increasing the challenge of fighting the cyberdemon significantly.

In the watery area (the central area of the map), there are three groups of four teleporters. Never visit the ones in the south, as they always lead to an inescapable room with a slow crushing ceiling (though a BFG9000 and some cell ammo appear within it during deathmatch games, they only act as a lure for unsuspecting players).