This level occupies the map slot MAP58. For other maps which occupy this slot, see Category:MAP58.

MAP58: The Mansion is a secret map that appears in the Doom II episode of the Sony PlayStation and Sega Saturn versions of Doom, which can be accessed from MAP44: Suburbs. It was designed by Tim Heydelaar and is built as a large, house-like structure befitting the level's name, containing multiple hidden and closed-off areas and plentiful enemies.

The player can access the third hidden stage, MAP59: Club Doom, from here. 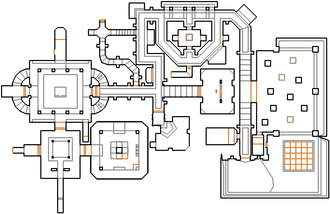 Head up the staircase on your right and then follow the walkway round to a door on the right. Go through this door to a room with a caged Hell knight, then turn left and head through the door in the east wall. You will enter a room with teleporters that repeatedly rise and fall - when the teleporter directly in front of the door lowers, run into it to enter a hidden room adjoining the starting area. Run towards the wall in front of you and it will automatically lower as you approach; keep running forward and you should jump across a gap to a platform holding the blue skull key.

As soon as you get the key, turn left and drop off the platform you landed on then go through the blue door in front of you. Follow the red floor here and it will lead you to a staircase; climb the staircase and open the large door on your left when you reach the top. You will see a dark room with many pillars, one of which holds the yellow skull key - to find it, stand by the south window and face north, then press the wall of the pillar closest to you to lower it and reveal the key. (If you have difficulty locating it, use the automap to help you - the pillar you need to press has a yellow line.)

Head back down the staircase and follow the red floor until it splits in two different directions; turn left and follow the red floor round a wooden structure until you see a yellow skull bar in front of you. Open this bar and press the switch in the passage behind it. Go back to the staircase, climb up it and then go down the other side - a metal block has opened here leading to an outdoor area. Turn left and approach the wooden square in front of you, then turn left and press the skull switch to lower the wood walls and reveal a maze of teleporters. You need to navigate this maze to reach the red skull key, but if you step on a wrong pad then you will be teleported to a nearby room full of damaging lava; head towards the red-flagged wall in front of you to escape.

Start by stepping on the teleport pad near you with a candle (once you step on a correct pad it will light up to help you recall the route). Then step south, east, south, east, east, east, north, north, west and west. Press the switch here to lower the platform with the red key, then exit the maze either by retracing your steps or deliberately teleporting into the lava room.

Backtrack to the room that had the caged Hell knight, but this time open the red door in the west wall and press the switch behind it. Now head east through the door leading to the door with moving teleporters. Go round to the east side of the room to a step that was previously blocked by red bars. Jump from here to the east teleporter when it lowers, and you will arrive on a staircase leading up to another red door. Go through the door, then step into the flashing oval-shaped structure in front of you to complete the level and go on to MAP45: Tenements.

See the instructions for secret #2 below for details on how to reach the secret exit switch, which takes you to MAP59: Club Doom. It can be reached after acquiring the red key and lowering the red bars in the room with moving teleporters.

Because of inconsistencies in the texture Y-offsets and sector heights, several textures on this map appear distorted: