This level occupies the map slot MAP59. For other maps which occupy this slot, see Category:MAP59.

MAP59: Club Doom is the super secret map that appears in the Doom II episode of the Sony PlayStation and Sega Saturn versions of Doom. It is considered "super secret" as it is accessed from MAP58: The Mansion, which is itself a secret level. It features a strobe-lit nightclub filled with revenants. Fittingly, a fast hardcore rave beat plays when the club building is entered. Completing this level takes the player to MAP45: Tenements. 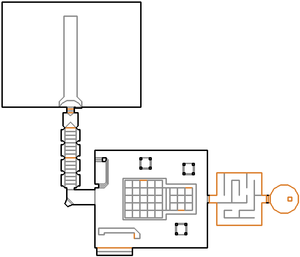 Map of Club Doom
Letters in italics refer to marked spots on the map. Sector, thing, and linedef numbers in boldface are secrets which count toward the end-of-level tally.

Head straight forward and go through the wooden door in front of you, then climb the stairs. The club music will start playing once you are halfway up the staircase. At the top, turn left to see a dance floor with flashing multi-colored lights populated by nine revenants.

Once all the revenants are dead, head behind the bar in the south-west corner of the club and press the switch here to temporarily lower a wall in the east side of the club. Get through the wall before it shuts to enter a small "flesh maze" - make your way through it to a wooden door, behind which you will find the exit switch.

There is a shelf behind the bar with 15 health bonuses. Press use on the shelf to lower it like a lift, letting you reach the top row of potions.

The north-east cage in the club contains a megasphere. To get to it, head east across the dance floor to its upper level, then go to the north-eastern flashing square and step north off this square to be teleported inside the cage. (You can also teleport into the other cages by stepping off the flashing squares due north and south of them.)

In the flesh maze, the last dead-end before the exit door holds a BFG9000 on multiplayer.

The Williams Entertainment logo, the colored lighting, and the fading lights in the last room are removed from the Saturn port, but essentially the map stays the same as the PlayStation version.

* The vertex count without the effect of node building is 408.