This level occupies the map slot MAP61. For other maps which occupy this slot, see Category:MAP61.

MAP61: Municipal Well is the sixty-first map of DUMP Episode 3: BFG Edition. It was designed by Flotilla and uses the music track "". 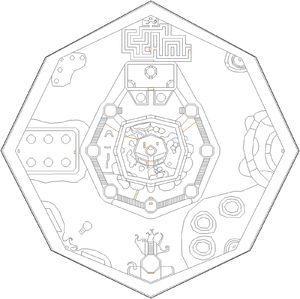 Map of Municipal Well
Letters in italics refer to marked spots on the map. Sector, thing, and linedef numbers in boldface are secrets which count toward the end-of-level tally.

The player 1 start (Thing 1) has no flags set for any of the three difficulty classes, but because of special handling in the engine, it functions normally in the level.

* The vertex count without the effect of node building is 1840.