This level occupies the map slot MAP77. For other maps which occupy this slot, see Category:MAP77.

MAP77: Hub is an introductory map in Doomworld Mega Project 2017 for ZDoom-based source ports. It was designed by StormCatcher.77 and Voltcom9, and uses no music track.

Similar to MAP30 of the previous year's project, the hub serves as a level selector, and will be the first map loaded when starting a new game if it is supported by the source port used. with four areas branching off of the central start position, each containing portals to other maps in the WAD. Each portal contains a screenshot of its respective level, and standing near it will display some information about the level on screen; its number, title, author, and relative difficulty. Walking through the portal will take the player to the appropriate level, and upon completion of the level, the player will be returned to the hub. 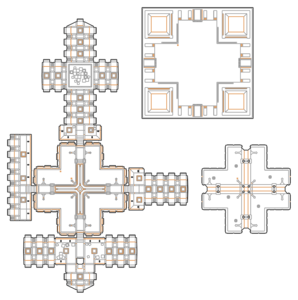 Map of Hub
Letters in italics refer to marked spots on the map. Sector numbers in boldface are secrets which count toward the end-of-level tally.