MAP99: Intermission (Stronghold: On the Edge of Chaos)

This level occupies the map slot MAP99. For other maps which occupy this slot, see Category:MAP99.

MAP99: Intermission is the intermission map of Stronghold: On the Edge of Chaos. It was designed by Daniel Gimmer (Tormentor667) and uses a custom music track. 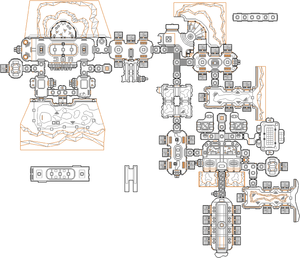 Map of Intermission
Letters in italics refer to marked spots on the map. Sector, thing, and linedef numbers in boldface are secrets which count toward the end-of-level tally.

You are returned to the main hub after finishing every level. Players normally appear on a teleporter pad outside the Tier 1 area, but if you have returned from STR01: Introduction then you will appear by its exit door on the west side of the level.

To use a shop, stand in front of the item you wish to purchase and press the use button, which will bring up a short description of the item; if you have enough credits, press use again to purchase the item.

Weapons are removed and the level is reset every time you return to the main hub; an ACS script is used to check which tiers you have unlocked, and which keys you have acquired from other levels so that secret levels can always be accessed.

Head north-east from the entrance area to reach the Tier 1 portals. You can enter the Too Young to Defend, Swamp, Asteroid and Twilight levels immediately, while Downtown is unlocked after completing the other Tier 1 levels.

After completing Tier 1, go to this area then head east through a now-open door and go down some stairs to a bar area, which has a computer that you can interact with to learn more about the different monsters encountered in Stronghold. There are also two doors here that lead to secret levels and require blue and green access disks to open - the blue disk is found in Downtown and will unlock Fortress of Damnation, while the green disk is found in Three Ways to Die and unlocks Phobos Anomaly.

From this area, head east down another set of stairs to a T-junction then turn left to reach the Tier 2 portals. You can enter the Sandstorm, Tropical Paradox, Volcanic Installation and Skyfire Research levels immediately, while Tunnel is unlocked after completing the other Tier 2 levels.

This area also contains a shop selling the regeneration and protection powerups.

After completing Tier 2, go through the now-open south door in this area to reach the Tier 3 portals. You can enter the Dangoo Desert, Inferno, Orbit and Armageddon levels immediately, while Frozen is unlocked after completing the other Tier 3 levels.

After completing Tier 3, go back to the T-junction leading to Tier 2 and head south - the barriers blocking your way to Tier 4 have lowered allowing you to reach the next set of portals. You can enter the Slaughtered, Delta Bunker, Tarstone Fortress and Dusk levels immediately, while the Overmind level is unlocked after completing the other Tier 4 levels.

This area also contains a shop selling the autodrone and smart bomb powerups.

After completing Tier 4, return to this area and head through the east door that has opened. You will be standing on a walkway leading to Lt. Carmack's desk - if you drop off the walkway or use the lift it will take you down to a busy bar area. The drunk marine standing by the jukebox will sell you the red keycard (used to open a door in Tier 1) for 10,000 credits, and there is a shop in this area which sells the morpher and vampirism powerups.

Head east from the bar area and follow the passage to reach the Tier 5 portals - on the way you will pass a door that requires a five-digit code to open and leads to City of Silence - Apocalypse; the code can be acquired from Emerald Skies. The Locus of Pestilence, Bipolar Bunker, Aurora Emitter and Eye of the Storm levels can be accessed immediately, while the Deepspace 12 level is unlocked after completing the other Tier 5 levels.

Return to the bar area near Tier 5 and head through the south door to reach the Tier 6 portals - at the entrance is a shop selling the 'I Win' powerup. There are eight levels in this area which can be completed in any order - Cyclone, Terrorforming, Emerald Skies, Convulsion of Nature, Black Gold, Snake Corridors, Antlion Nebula and Three Ways to Die.

After completing all of the regular levels, you will be instructed to report to Lt. Carmack for debriefing - he will be standing by a fountain on the north side of the entrance area. After speaking to him, purchase all the powerups and supplies you can then go to the bar area on the north side of the entrance area where a scientist has appeared. Talk to the scientist and he will rant about an enormous monster heading for the base; when he asks if you are ready to face it, respond affirmatively to begin the final level, The Final Stand.

Open the tech panel next to the display screen in Tier 1 to reveal a passage leading to a shop selling weapon powerup kits.

* The vertex count without the effect of node building is 21603.