This level occupies the map slot MAPX02. For other maps with a non-standard slot, see Category:Non-standard map slots.

MAPX02: Aegis Power Plant (titled in-game as Old Aegis Power Plant) is the second map in the Director's Cut episode of Simplicity. It was designed by Melissa McGee (Agent Spork) and uses the music track "Infinite", originally created by Tom Mustaine for TNT: Evilution. The par time defined in MAPINFO is 2:00.

This map is an earlier version of MAP01: Aegis Power Plant. 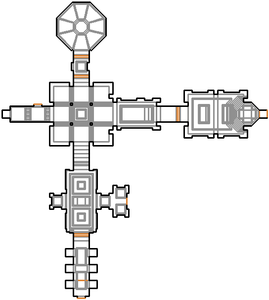 Map of Aegis Power Plant
Letters in italics refer to marked spots on the map. Sector, thing, and linedef numbers in boldface are secrets which count toward the end-of-level tally.

Kill the two imps in front of you, then open the door in front of you to face two shotgun guys. Open the next door to enter a square chamber with a demon, imps and zombies guarding a box of shotgun shells, then go through the east doorway and head down the steps to a green door that has more of the same enemies waiting behind it. Go to the east end of the room and press the button here, which will lower to reveal a revenant, then flip a second switch behind it and kill some more enemies that teleport near the entrance. Go back to the square chamber to find that a set of bars blocking the west doorway have lowered, allowing you to reach a button behind them.

Press the button to open another door to the south, which leads to a junction with shotgun guys, imps and a cacodemon, then go into the east antechamber to find another button guarded by more shotgun guys; after pressing it, kill two demons that teleport in then return to the previous button to find that some more bars have lowered allowing you to reach the blue keycard guarded by a Hell knight. Return to the junction and open the locked door at the south end, kill another knight then approach the exit switch in front of you - it will close and you will need to deal with demons, imps and shotgun guys hiding behind the monitor walls on either side. The exit switch will automatically open after ten seconds, allowing you to flip it and end the level.