This level occupies the map slot MAPX03. For other maps with a non-standard slot, see Category:Non-standard map slots.

MAPX03: Waste Processing (titled in-game as Old Waste Processing) is the third map in the Director's Cut episode of Simplicity. It was designed by Melissa McGee (Agent Spork) and uses the music track "On the Hunt", originally created by Robert Prince for Doom. The par time defined in MAPINFO is 2:30.

This map is an earlier version of MAP02: Waste Processing. It was moved to the Director's Cut episode with the release of Ultimate Simplicity. 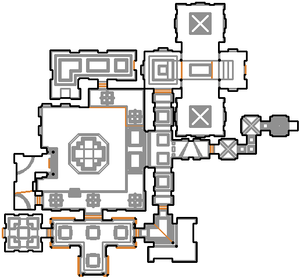 As soon as the level starts, use the shotgun under your feet to kill an approaching demon then go forward to a chaingun guarded by two chaingunners. Open the north door to enter a large hall with a nukage pit, bordered by a walkway with imps and zombies on it, then open another door to the west and push past a demon and two chaingunners to reach a switch guarded by a Hell knight. Flipping the switch will raise a bridge on the east side of the pit - go round to that bridge and kill the enemies that have teleported there, then head north to another door and kill a couple of shotgun guys waiting behind it before pressing a button on the east wall. Now follow the passage west and south to find a couple of chaingunners guarding the blue keycard, which is on a lowering pillar.

Return to the starting area and open the east door, then walk round the corner to open two windows with chaingunners and zombiemen behind them. Open the north door and kill two spectres in the dark corridor ahead, then head forward to another door and kill the zombiemen and imps waiting behind it before proceeding east across a bridge to find a switch. Flipping the switch activates a trap that triggers when you go back across the bridge, blocking the steps on its west side and spawning two cacodemons that must be killed to escape. Go back to the dark corridor and proceed east past some bars that have lowered to reach another door, open it then fight your way past imps, chaingunners and a knight to get the yellow keycard. With this key, go back to the starting area and open the west door to find two revenants protecting the exit switch.

* The vertex count without the effect of node building is 2308.