This level occupies the map slot MAPX04. For other maps with a non-standard slot, see Category:Non-standard map slots.

MAPX04: Hazard Storage (titled in-game as Old Hazard Storage) is the fourth map in the Director's Cut episode of Simplicity. It was designed by Melissa McGee (Agent Spork) and uses the music track "The Demons From Adrian's Pen", originally created by Robert Prince for Doom. The par time defined in MAPINFO is 2:35. 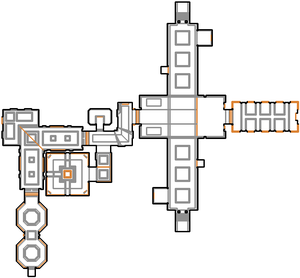 Map of Hazard Storage
Letters in italics refer to marked spots on the map. Sector, thing, and linedef numbers in boldface are secrets which count toward the end-of-level tally.

Use the shotgun at your feet to kill the zombiemen and imps ahead, then open the door in front of you to slay some more imps who are guarding a chaingun. Stepping on or past the chaingun will seal the doors leading out of this area and open a compartment to your left with five demons - kill them then enter the compartment and press a button on the west wall to unseal the doors again. Open the east door and kill the shotgun guys and imps ahead, then go round the corner to find a cacodemon guarding a switch that will open a wall you just passed. Behind this door is a button, and pressing it will lower the surrounding walls to reveal five lost souls, which must be destroyed to open a wall behind you with two more souls and a cacodemon behind it. Go into this compartment to open another wall on your right and kill all the demons waiting behind it, then press all four buttons in this wall to lower the nukage-fall in the middle which has the blue keycard on it.

Taking the blue key will spawn lost souls and cacodemons around you; kill them then return to the hallway and go round the corner again to open the blue key door here. Behind this door are two more cacodemons above a nukage trench that has imps and demons in it - you must drop into the trench then go to its north and south ends to find two switches, flip them then enter either of the red teleporters to return to the upper floor. You will see that two buttons have been revealed on the other side of the trench - shoot both of them to raise a bridge and kill the demons, imps, shotgun guys and chaingunners that teleport in ahead, then open the door on the other side of the bridge to find two demons and two cacodemons guarding the exit switch.

* The vertex count without the effect of node building is 1306.

This level contains the following numbers of things per skill level, not including things generated by Thing_Spawn or similar functions: