This level occupies the map slot MAPX05. For other maps with a non-standard slot, see Category:Non-standard map slots.

MAPX05: Cargo Transfer (titled in-game as Old Cargo Transfer) is the fifth map in the Director's Cut episode of Simplicity. It was designed by Melissa McGee (Agent Spork) and uses the music track "Demons On The Prey", originally created by Robert Prince for Doom. The par time defined in MAPINFO is 2:40. 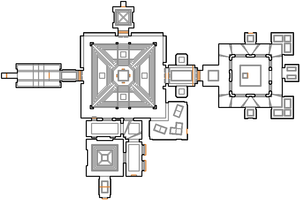 Map of Cargo Transfer
Letters in italics refer to marked spots on the map. Sector, thing, and linedef numbers in boldface are secrets which count toward the end-of-level tally.

As the level starts, step to your right to kill two zombiemen then turn round to dispose of a couple of imps guarding a shotgun and a switch. The switch will open the west wall and reveal an imp along with two shotgun guys and two demons - fight your way out to enter a large square chamber, then flip the switch on the east wall to lower it and reveal more of the same enemies guarding a door. Open the door to face two shotgun guys and a demon guarding a chaingun, then fight your way round to the east side of a square corridor to find a doorway leading outside where four demons are guarding another switch. Flipping this switch will open compartments containing more demons, imps and shotgun guys - get to the north compartment and flip another switch inside it, which will lower the center block and allow you to get the yellow keycard.

Retrace your steps back to the square chamber; before you get there, you will need to escape a trap where several demons teleport in and can easily surround you if they are not killed quickly. Back in the chamber, kill a waiting cacodemon and spectres then open the west door (requiring the yellow key) to confront a Hell knight, then take the super shotgun behind it and press the button to drop into a room with six demons. Enter the alcove at the back of the room and flip the switch here to lower a teleporter, press it to return to the floor above then go back to the square chamber, where more spectres have spawned, to find that a door in the south-west corner has opened. Go through this door and kill the knight that appears in front of you, then follow the hallway east and south past some demons to reach another switch that you can flip to lower a wall behind you, revealing a room full of zombies.

Kill the zombies waiting behind this wall then go into the next room and walk south towards another switch; a knight will appear in front of you when you get close to it. Flip the switch then go back to the square chamber to see that four satyr switches have risen around the center column; pressing all four will lower the column to reveal two arch-viles guarding the red keycard, and bars will also rise in front of all the doors to block any escape. Kill both arch-viles to lower the bars, using the pillars around the room as cover if needed, then open the north door to find an arachnotron guarding the exit teleporter.

The four switches in the square chamber can be pressed without without raising them first, allowing players to bypass most of the map.

* The vertex count without the effect of node building is 1490.