This level occupies the map slot MAPX06. For other maps with a non-standard slot, see Category:Non-standard map slots.

MAPX06: Mechanical Labs (titled in-game as Old Mechanical Labs) is the sixth map in the Director's Cut episode of Simplicity. It was designed by Melissa McGee (Agent Spork) and uses the music track "Horizon", originally created by Tom Mustaine for TNT: Evilution. The par time defined in MAPINFO is 3:20.

This map is an earlier version of MAP05: Mechanical Labs, and was moved to the Director's Cut episode with the release of Ultimate Simplicity. 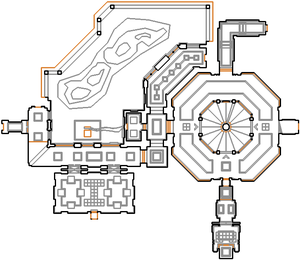 Map of Mechanical Labs
Letters in italics refer to marked spots on the map. Sector, thing, and linedef numbers in boldface are secrets which count toward the end-of-level tally.

Take the shotgun and press the button in front of you to lower the wall, then step forward and kill the imp and shotgun guys that spawn. Open the sliding doors ahead and kill the imps and zombies waiting behind them, then activate another lift at the back of the room and kill a demon before pressing the button behind it to raise the lift again and carry you up to a door with a large octagonal room behind it. Kill the waiting imps, demons and shotgun guys then press the button inside the east alcove to spawn two Hell knights and two more demons, as well as lowering a wall on the west side to reveal a door. Go through this door and slay a knight that appears in front of you, then open another door directly ahead to find a demon guarding a chaingun and a button - the button will lower the south wall in the previous room, revealing a revenant guarding another door. Open this door to reach a corridor with imps, shotgun guys and chaingunners, then follow the corridor west and north until you reach another button - two revenants will appear to defend it as you approach.

Press the button then go back along the corridor to see that two sets of bars have opened, letting you open the sliding doors behind them to enter a room with two cacodemons and two knights protecting a super shotgun. Press the button in the south wall to reveal the yellow keycard, take it then go back to the west side of the corridor (where you fought the revenants) and press the yellow-striped bars here to lower them, kill a waiting baron of Hell then press the button it was guarding to lower a wall elsewhere in the map. Go back to where you found the chaingun to find that a hallway with demons, imps and zombies has been revealed ahead, then go to the end of this hallway to reach a button that will open the door next to it.

Go outside and follow the grassy area west and south to find a rocket launcher in front of a switch - prepare yourself before flipping the switch as it will spawn waves of imps, demons, cacodemons and mancubi that must all be killed to lower a pillar holding the red keycard. Take the key then go back to the octagonal room and open the north door, then push past two revenants and two barons to reach a switch that will open the inner chamber of the octagonal room. Go inside this chamber and flip the switch on the north wall to end the level.

* The vertex count without the effect of node building is 2168.

This level contains the following numbers of things per skill level, not including enemies generated by Thing_Spawn or similar functions: