This level occupies the map slot MAPX07. For other maps with a non-standard slot, see Category:Non-standard map slots.

MAPX07: Twisted Way is the seventh map in the Director's Cut episode of Simplicity. It was designed by Melissa McGee (Agent Spork) and uses the music track "Death's Bells", originally created by L.A. Sieben for TNT: Evilution. The par time defined in MAPINFO is 3:50. 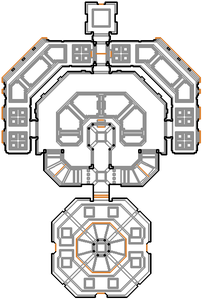 Map of Twisted Way
Letters in italics refer to marked spots on the map. Sector, thing, and linedef numbers in boldface are secrets which count toward the end-of-level tally.

Kill the zombieman in front of you as well as two imps waiting on either side, then go up the steps and step on to a stone ledge above. Fight off six more imps that appear behind you, then press the three switches on the west, south and east sides to reveal a skull door in the north wall. Open this door and kill the zombieman and imps waiting behind it, then go straight forward to a shotgun in front of another satyr switch that will spawn two demons behind you, but also open two sets of bars blocking your way to some staircases. Go down either staircase and kill the demons and shotgun guys waiting in the room below, then press the satyr switch near the middle of the room to spawn four cacodemons behind you.

Killing all the cacodemons will lower two walls on the east and west sides - you must step through each wall to a hallway with demons, imps and zombies then fight your way north to find a satyr switch at the end of each hallway. After pressing both switches, return to the large room and enter a narrow passage that has opened on the north side; as you step over the medikit in this passage, a wall will rise to block your path to the exit switch. Go back to the large room and take the chaingun that has appeared in the center, which will cause waves of imps to start spawning in the room; after ten waves, the wall that blocked your path earlier will lower and allow you to reach the exit switch.

* The vertex count without the effect of node building is 2191.

This level contains the following numbers of things per skill level, not including things generated by Thing_Spawn or similar functions: