MAYhem 2018 is a pair of megawads for Boom-compatible source ports, totaling 42 levels created in May 2018 by members of the Doomworld forums. It is the seventh installment of the MAYhem series, and was led by James Caldwell (Obsidian) for the first time in the series, who took over from Michael Fraize (Marcaek).

Initially intended as a single project, series founder TheMionicDonut proposed that as a reference to the Pokémon series of video games, MAYhem 2018 would feature two megawads, run as separate projects at the same time. These became the orange and purple editions of the WAD, with each heavily featuring the respective colours. The orange project was announced first, with the purple project thrown in as a curve-ball 24 hours later. The orange edition features 22 levels, whilst the purple edition has 20. Each edition contains its own roster of custom monsters through the use of DeHackEd, custom palettes to bring out the colour themes better, and resources pulled from Violence by Brayden Hart (AD_79) for the purple edition, and the unfinished Orange is the New STARTAN by Jazz Mickle (jmickle) for the orange edition. The WADs were finalised and uploaded to the idgames archive in early November 2018. 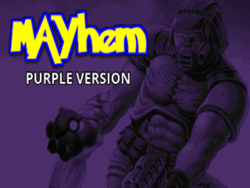 Title screen of the purple edition.

This new weapon is found in both versions. It replaces the chainsaw and is fairly self-explanatory. To account for the increased fire rate, the player can carry 100 rockets by default, and up to 200 with the backpack. Rocket ammo pick-ups also give double their usual amount.

Hades sphere
Initially invisible, this monster fades into view when it sees the player, taking the form of a floating red heart with a network of disconnected blood vessels branching off of it. It will slowly float towards the player, and will explode upon impact with them, destroying itself in the process. It has 35 hit points and will also explode when killed, damaging everything within its blast radius. It replaces the lost soul.
Ethereal soul
A grey, translucent flying skull that can charge at the player or launch a red projectile to attack. It is essentially a more aggressive lost soul. It has 180 health, and replaces the unused dead lost soul decorative sprite.
Shadow
This dark, imp-like creature moves quickly and can be hard to spot in dark areas. It attacks by launching a barrage of red projectiles. It has 120 health and replaces the arachnotron.
Cybruiser
A mechanical baron of Hell, wielding a rocket launcher. It has 1000 health and replaces the spider mastermind in order to inherit its immunity to blast damage. The spider mastermind in turn replaces the baron, and is unaltered save for its loss of splash damage immunity.
Hades elemental
This airborne, pain elemental-like miniboss can attack either by spawning Hades spheres, or by launching a spread of five mancubus fireballs. It has 1600 health and spawns three additional Hades spheres upon death. It replaces the pain elemental.

Suicide bomber
This zombie variant will run towards the player, making a lot of noise as it does so, and will explode upon reaching them, dealing a large amount of damage and killing itself in the process. It has 60 health, and will explode if killed, damaging everything within its blast radius. It replaces Commander Keen.
Possessed marine
A marine with purple armor, armed with a plasma gun that it will fire in short, rapid bursts. It has 100 health and replaces the Wolfenstein SS.
Grell
An airborne enemy similar in appearance to the Doom 3 cacodemon. It will shoot a purple projectile similar to that of the Hell knight and baron of Hell, dealing more damage than a regular cacodemon, but the monster itself is also weaker, with 300 health in contrast to the cacodemon's 400. The grell replaces the baron of Hell.
Chaingun spider
These arachnotrons have swapped their plasma guns for chainguns, making them more deadly from a distance. To compensate, they have 450 health in contrast to the arachnotron's 500. This monster replaces the bloody mess 2 decoration.
Immolator
The top half of a cyberdemon with jet black skin that has magically gained the power of flight. It attacks by launching a small spread of six mancubus fireballs, and will also fire three homing missiles identical to those of the revenant if its pain state is triggered. It has 2500 health and replaces the spider mastermind.