MUDTOWN is a single-level PWAD for Doom that was released in 1994. It was designed by Dave Swift and released as part of his MUDWADS collection. 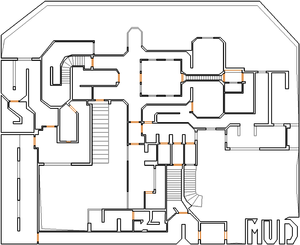 Map of MUDTOWN
Letters in italics refer to marked spots on the map. Sector, thing, and linedef numbers in boldface are secrets which count toward the end-of-level tally.

Three boxes of rockets (Things 399, 477 and 478) have no flags set for any of the difficulty classes, so they do not actually appear in the level.

* The vertex count without the effect of node building is 822.