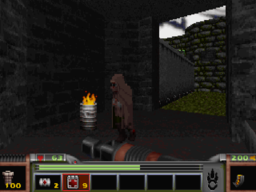 MacGuffin stays warm by his fire in the "bum hole" southeast of Tarnhill. 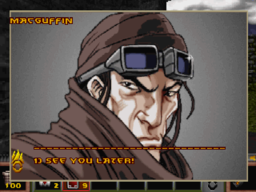 MacGuffin tells the Strifeguy to leave him alone, when the latter attempts to talk to him after his one question is answered.

MacGuffin is a minor civilian character from Strife who can be found in the town of Tarnhill. He shares the same sprite and actor as the generic beggar. He is voiced by Jarion Monroe (IMDb).

He is a fairly old man who is found near the sewage plant, in an area referred to as the "bum hole". The only time he appears useful in the story is during Governor Mourel's "messy" chore, where he can help the player complete the chore. He gives an answer to a single question the player asks him.

The character's name is most likely a reference to the term "MacGuffin," defined as an element of a work of fiction that, like the character himself, advances the plot but has no other importance.