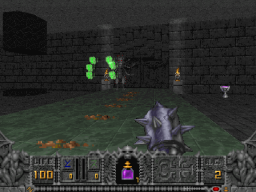 The Mace of Contrition being used against Korax

The Mace of Contrition is a weapon from Hexen, the starting weapon of the Cleric. It is a short, spiked mace which does little damage and does not require mana. However it has quite a long reach for a melee weapon, so it is possible for a player to strike enemies without being in range of their target's melee attacks.

Although the Mace of Contrition lacks the power of the fighter's Spiked Gauntlets and the range of the mage's Sapphire Wand, it still has some value as an anti-Centaur weapon: in addition to conserving mana, its damage cannot be reflected back at the player (unlike the Serpent Staff) and its damage is focused in single strikes rather than spread across time (unlike the Firestorm). The Mace is, however, less useful against Slaughtaurs due to their ranged attack capability.

The manual states that in most cases, several hits are required to cause contrition in an enemy.