This article is about a weapon from the alpha versions of Doom. For the Doom 3 weapon, see Machine gun. 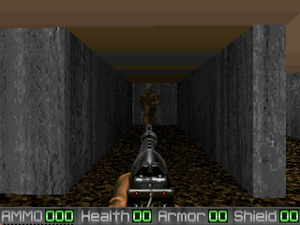 The machine gun in the Doom v0.3 alpha.

The machine gun's original temporary pickup sprite is visible here as the second item from the left.

The machine gun is a weapon which occurs only in the alpha versions of Doom, a concept first envisioned in Tom Hall's Doom Bible design document for a fully automatic bullet weapon. It is not to be confused with the rifle alongside which it existed, which was only a semi-automatic weapon at most. The machine gun persisted until at least the Doom v0.5 build, after which it was replaced with the released game's chaingun (a concept recycled from Wolfenstein 3D, and likely originally inspired by the 1987 science fiction action/horror film Predator).

The automatic machine gun is described as such in the Doom Bible:

Unused HUD graphics exist for the machine gun in the Doom v0.2 IWAD. The WPICMAC lump contains an icon for the weapon, and the WBOXMAC lump contains text reading "machine gun". The HUD icon was directly taken from Wolfenstein 3D, where it was used on the status bar for that game's machine gun.

The machine gun first appears as a usable weapon in Doom v0.3. It uses HUD sprites named PMAC. It is owned by default in this version of the game, and can be fired, albeit with no effect on the environment other than a light flash. It is depicted with iron sights and has an appearance that is roughly intermediate between the game's rifle and its shotgun. The back of the gun's barrel has a pair of small red lights and what appears to be a wire coming out of it, giving the weapon a somewhat futuristic aesthetic. The player raises the weapon significantly higher to fire it, bringing the sight at its tip roughly in line with the gun's target.

A pickup sprite also now exists for the weapon with the lump name MGUNA0, but it only consists of the outline from the weapon's HUD icon crudely filled in with various gradients and is obviously temporary.

The machine gun itself was not altered in Doom v0.4 from its appearance or functionality in the 0.3 alpha, but its pickup sprite was redrawn, retaining the existing silhouette, but filling it with hand-drawn pixel art.

In Doom v0.5 the machine gun is no longer owned by default and cannot be obtained in the game, but its resources still exist in the game's IWAD. The HUD sprite has been significantly reworked, giving the weapon a much bulkier and more angular appearance. It also now has a large metallic stock with ornate filigree, a change shared with the rifle. The weapon is also referenced by the I_MACHIN and I_WMACHI graphics for the status bar.

The machine gun is replaced with the chaingun in the Doom press release beta and uses HUD sprites named CHGG as in the release version. Its appearance in this version is not entirely final, as the muzzle of the weapon is more realistically hidden due to perspective, but has an arguably less aesthetic cut-off appearance as a result. Its pickup sprite (still named MGUN) is also redrawn to match the chaingun concept.