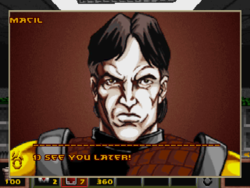 Macil's hardened visage, as he orders the Strifeguy to fight for The Front and freedom.

Macil is a major character in Strife. He is the leader of The Front, a rebel movement dedicated to the destruction of The Order. Unlike a common Front soldier, Macil wears a different uniform and no helmet. Like many characters in Strife, details of his sprite differ from his portrait, where he is portrayed as wearing heavy scale armor. He is voiced by Jarion Monroe (IMDb).

Initially, Macil seems to be the type of person who fights for justice and freedom. First, the Strifeguy has to complete a few missions for him, such as freeing the prisoners. Thanks to the Strifeguy's efforts, Macil's forces are able to prepare for an assault on the castle. Once the castle gates have been destroyed via the sewers, Macil will order the Strifeguy to join the assault and destroy the Programmer.

Once the Programmer is dead, the Strifeguy has received the first Sigil piece, and the Front has taken control of the castle, Macil will tell him to find the other pieces and to seek the Oracle for more information on their whereabouts. When the player has followed the Oracle's advice and killed the Bishop to get the second piece, the Oracle will suggest that Macil's true interests are in claiming the Sigil for himself, claiming that it is he who holds the third piece.

At the point, the player can choose to believe the Oracle's words and kill Macil first. This leads to a chain of events that bring about the game's worse ending. Alternatively, the player may still trust Macil rather than the Oracle by killing the Oracle first, leading to the better ending.

If the Oracle is killed first, the third piece is received from the Oracle's spectre, and Macil will seem to put off the Sigil mission in favor of having the Strifeguy investigate a factory that reportedly transforms people into biomechanical acolyte soldiers. The factory is within the Commons. Macil gives Strifeguy the brass key so that this area can be entered.

After discovering and destroying the factory's converter, BlackBird will suddenly claim that Macil has knowingly sent two hundred people to their deaths, and that he needs to be confronted immediately. It is revealed that Macil has indeed captured a Sigil piece, and that it has driven him insane. When Strifeguy confronts him, he is no longer the man known before, and a battle begins. Once he lies slain, the player will receive the fourth piece of the Sigil.

Until the Order's castle is captured, it is impossible to actually kill Macil, as he is invulnerable to damage. However, he can be killed any time after the player has two or more Sigil pieces. Doing so will cause his spectre to emerge and attack. Macil himself has 95 hit points when initially fought, and can only be damaged by the spectral energy of the Sigil.

Killing Macil can be a smaller effort if the player has three Sigil pieces rather than two; the Sigil's enhanced, wide spread attack makes it easier to cause damage. One could also try to use the nearby rebel guards as temporary meat shields, though they probably will not last for long.