Magnolia is a set of three Boom-compatible maps released by Zachary Stephens (Ribbiks) in 2018. Like many of his past works, this wad alters the palette to allow for a range of teal and magenta colors to replace a wide variety of the original shades.

Unlike many popular WADs, the original release of Magnolia did not contain an Ultra-violence configuration, perhaps in an effort to convince players to play the lesser skill levels first. Since July 2022, the magnolia_uv.wad file is available as a separate download on Ribbiks' homepage. The fourth, bonus map is included, but it does not offer any enemies or resources, and cannot be completed. Ribbiks also composed the soundtrack.

The WAD was named as a runner-up at the 2018 Cacowards. 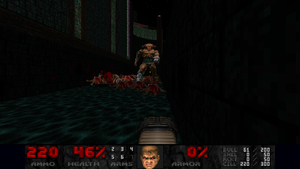 Teal cyberdemon
These teal-coloured cyberdemons are functionally identical to their original counterparts. However, they only have 1000 hit points, the same as a baron of Hell, making them much weaker by comparison. They can also in-fight with regular cyberdemons due to being a replacement for the spiderdemon, and this ability is used for a great number of monster puzzles in the WAD.
Evil eye
Once a simple decoration, the evil eye has now gained a plasma attack identical to that of the arachnotron. It is stationary, invulnerable, and will not stop firing until the player moves out of its line of sight. It replaces the Wolfenstein SS.

There are eight bonus maps that were given by Ribbiks to the first eight players who submitted HMP demos as per the instructions in the WAD's readme file. All of these occupy the MAP31 slot and are loaded as an extra WAD file alongside the main Magnolia WAD.

The maps Oku's Revenge II: Even Angrier and Stomm were given to Daerik and Xyzzy01 respectively who released them publicly. The bonus map names were revealed by decino at the end of his playthrough video of Stomm.

The DSDA episode records for Magnolia are: