"What did you hope to accomplish by coming here, mortal? You have something that belongs to me. And I want it."
― The Maledict [source]

The Maledict appears as a mostly skeletal dragon with a large set of wings, two legs with clawed feet, a long tail and a head similar to a Forgotten One. It emits a loud, piercing scream and has empty eye sockets. The game's ending cinematic shows that the demon is enormous when compared to a human, capable of swallowing one whole.

The final battle consists of two phases. In the first phase, the airborne Maledict has 2500 hit points and summons Forgotten Ones to attack the player. It also can hover at the edge of the platform and spew a spread of several fireballs at the player, and jet across the platform leaving behind a Flamewall stream in its wake much like that of the Arch-Vile. After the Maledict's health has been reduced to less than 25%, the second phase of the battle begins. Maledict's health is reset to 5000, and the demon proceeds to retreat to the giant skull-shaped volcano on the battlefield and rains down fireballs from the sky. It also continues to use its Flamewall attack, which deals massive damage to the player.

Note that in Doom 3: BFG Edition, the Maledict will never summon Forgotten Ones regardless of the skill level. 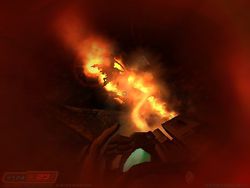 Fighting the Maledict with the BFG-9000, with the Artifact in use.

To defeat the Maledict, the player is to use the Artifact. Taking advantage of helltime power, the player can fire at the Maledict using his strongest weapon (preferably the BFG 9000) with greater accuracy. The Artifact's berserk power also increases the damage done to the Maledict by the player's weapons, allowing them to wear down its considerable 2500 hit points much more quickly. The best time to attack the Maledict is when it hovers over the skull-shaped mountain and summons Forgotten Ones; at this time it flies in a predictable pattern and remains in view for the longest period of time.

During the second phase of the battle, there is a "safe spot" from the Maledict's meteor shower attack, right inside the curve of one of the giant skull's horns, just to the left of the Maledict's perch. The player can fire at the Maledict from this position while safe from the raining meteors, although they will need to dodge around whenever the Maledict flies off to avoid its flamewall attack, or they could save the artifact for phase 2 of the battle and use it to slow time to allow the player to throw the meteors back at the Maledict.

When firing at the Maledict as it is flying, the best weapon to use may be the chaingun, as other powerful weapons such as the plasma gun or the rocket launcher have projectiles that move too slowly to reliably hit the flying Maledict.

During the progression of the battle, the wings of the Maledict can be seen to slowly deteriorate, serving as an indicator for how much damage the player has delivered to the boss. This is particularly evident in the skin flaps that connect between the body and the nearest wing fingers, and with some additional tatters that appear between the first and second fingers. All of the skin flaps become gradually tinged with blood.

At the end of Doom 3, the recon team, having rescued the young Marine after he defeated the cyberdemon and sealed the Hell Hole, never discovers Betruger's whereabouts. It turns out that the mad scientist has been transformed into a large, twisted skeletal monstrosity, with Betruger's head at the end of the creature's tongue. Its appearance at the end of Doom 3 is initially left open to interpretation as to whether Betruger is being rewarded by Hell for his loyal services, or punished for failing to kill the Marine. Resurrection of Evil makes it clear, however, that this was part of Betruger's pact with Hell and his power over most of the demon forces.

The connection between Betruger and the Maledict is never exactly explained. Whether Betruger merged with the Maledict or is the Maledict is never specified. It uses "us" to refer to itself or possibly all of Hell. Given Betruger's personality change however after his first trip through the portal, it may be possible that the Maledict's spirit inhabited Betruger's body and that Betruger's own soul was consumed (this is supported by the fact that Betruger sometimes refers to the forces of Hell as his "children"). It is not known whether Betruger is a part of the monster or if he is controlling it. Either way, he does not seem to mind, as he apparently sees his new form as preferential to remaining human, referring to anyone else insultingly as "mortal."

Once confronted, the Maledict questions why the Marine would enter Hell, but, now having the opportunity to seize the Artifact personally, he refers to it as his personal property and, not waiting for a response, begins his attack.

When the Maledict's final 5000 hit points have been exhausted, the ending cinematic shows the demon swooping down at the Marine. The Marine fires a rocket which misses and the Maledict lunges and promptly grabs him with its jaws, swinging him around over its head and then throwing him down to the ground. The Marine passes out. When he wakes up, he is greeted by Betruger's head. Betruger says, "Return what is ours," referring to the Artifact. The angry Marine complies when he shoves the Artifact into Betruger's mouth, resulting in a massive explosion that disintegrates both the Maledict and the Artifact. The only thing left is Betruger's human skull which is seen rolling out onto the ground.