Man on the Moon

Man on the Moon is a single-level PWAD for Doom II and an MBF-compatible source port such as PrBoom+ that came out in November 2018. It was designed by Yugiboy85 and uses the music track "Gutter Penny" by Gus Knezevich (Alfonzo). It was named a runner-up at the 2018 Cacowards ceremony.

Man on the Moon includes one custom monster, the Terminator (replacing the helper dog), as well as updated sprites for all three former humans. 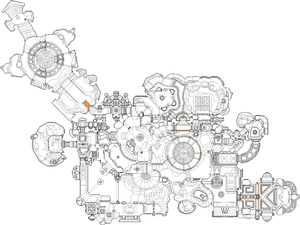 Map of Man on the Moon
Letters in italics refer to marked spots on the map. Sector, thing, and linedef numbers in boldface are secrets which count toward the end-of-level tally.

* The vertex count without the effect of node building is 29578.