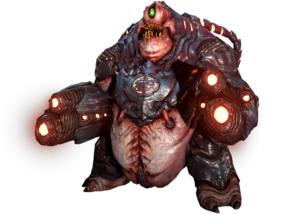 A mancubus.
This article is about the monster in Doom (2016). For other games, see:

The mancubus makes another return in the 2016 Doom game, retaining most of the characteristics of its classic and Doom 3 forebears while introducing new characteristics which combine to make it one of the game's most serious threats. Still capable of firing powerful blasts from twin arm cannons, this incarnation of the monster is also equipped with a long-range flamethrower that can deal constant damage. Uniquely, it is also highly mobile - while still a relatively slow walker, it can jump up and down ledges to give chase. It also possesses a powerful ground pound attack which it will rely on if the player comes into melee range, causing significant damage over a broad area. Differences in appearance from its predecessors include a cyclopean head build with a single prominent green eye, and an ovoid, vertically oriented mouth which is lined with sharp teeth, making him look possibly related to the cacodemon.

An even more powerful and well-defended version of the monster also exists in the form of the cyber-mancubus, which has been enhanced using UAC technology.

The mancubus's fireballs lose accuracy at long range, making it preferable to engage it from a safe distance while strafing around it. In close quarters, it will try to use its ground pound to force the player back before following up with its flamethrowers, so it should not be engaged up close unless you have the chainsaw sufficiently fueled.

While a considerable portion of the mancubus's body is armored, its head, back, and stomach are fully exposed to attack. The mancubus's stomach is its main weakness, and if killed by a shot to the stomach it will explode and damage nearby demons. A fully charged shot from the Gauss cannon is enough to accomplish this in most cases.

Mancubi seem to prefer fighting revenants if they are present.

Two glory kills are currently known to exist against the mancubus:

The mancubus is said to have a foul, nauseating odor due to its diet of rancid flesh which continues to decompose inside the creature's body. Its innards are volatile, flammable, and highly toxic. At maturity, the monster's hands become covered with a chitinous growth and the tissue inside the barrel-like protrusion rots. The noxious fluids can then be spewed from the arm cannons under pressure, causing ignition, giving the demon biological flamethrowers. Mancubi are given light armor at maturity as well, but they always outgrow it due to their ravenous appetites.

Their peculiar biology is also their greatest weakness - the skin surrounding their bellies is easily pierced, and when exposed to air their internal organs violently explode, showering a considerable area with their poisonous remains.