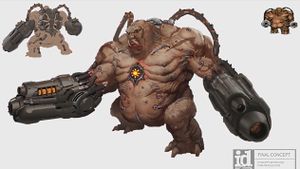 The mancubus returns in Doom Eternal with a new design based on its appearance in Doom II. It now has two smaller, greenish eyes, and a yellow exposed heart-like organ in its chest. It's controllable by players in Battlemode, and is also expected to occur in the upcoming Invasion gamemode.

A cybernetics-enhanced version of the mancubus again occurs as the cyber-mancubus.

The mancubus largely maintains the same attack behaviors as the version in the previous game, including the ability to use dual flamethrowers at short range in addition to its usual fireball launchers. Its close range area-of-effect attack has been changed to leave an area of damaging energy on the ground in order to ward players from staying close to it, and does significantly more damage.

Due to the destructible demons system, the mancubus' arm cannons can be damaged, making the attacks from the aforementioned cannons significantly weaker and disabling the flamethrower function entirely.

It is best to perform a glory kill on the mancubus' chest as this will cause the mancubus to explode and damage and falter large demons or even kill smaller demons within the vicinity.

Unlike the mancubi seen during the Mars invasion, which had naturally-occurring arm cannons, the mancubi invading Earth show obvious signs of man-made augmentation. The armor plating that has replaced their original carapaces and enhanced flame cannons suggest that the UAC cultists, directly controlled by Hell, seek to improve their already potent fighting skill.

The mancubus is one of the six controllable demons in Battlemode. It is resilient and deals considerable damage with its flamethrowers and fireball cannons, but is sluggish and a large target. It can also deploy a smoke bomb that hinders vision and allows it to either escape from a dangerous situation or set up an ambush. Prior to Update 2.1, the mancubus could not attack after its second jump until it returned to the ground; it can now attack at any time.